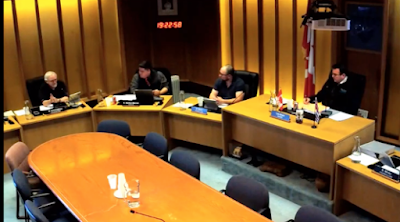 The tail end of Monday's City Council Session found Councillor Barry Cunningham sounding just a little bit frustrated that his quest to provide for more public information for city residents seems to be falling on deaf ears at City Hall.

The Councillor has long been an advocate of inviting a range of services and community organizations to take part in the Committee of the Whole process (known as COW).

With Mr. Cunningham previously seeking such groups as the RCMP, Fire Department and the list of civic departments to provide an update for council and the public as part of that community engagement portion of the Council sessions.

He has also noted in the past that the Committee of the Whole process also provides an opportunity for those Societies that the city provides funding for, to come before Council to share how they are making use of that funding and what their plans are for their work.

Last August he highlighted how if council wanted to be viewed as transparent the opportunities from the Committee of the Whole were something they should explore.

When it comes towards an update from the Airport society, Mr. Cunningham reissued the call for a presentation from the Airport again last September which as the calendar shows went unanswered for the following seven months.

His most recent request came at the April 18th Council session, when he had requested that staff seek out someone from the Prince Rupert Airport Society to make a presentation to Council and provide some notes on developments at the city's main transportation link at Digby Island.

Yet as he noted on Monday, no one was there to make a presentation, with the Councillor adding that his request for a list of future presentations and presenters for Council to hear from has also yet to be generated.

When it comes to the Airport Society, it's rather puzzling that city staff couldn't find someone to provide the update.

What with the Mayor and City Administrator key to the work of the Airport Authority ever since the Mayor and Council revised how the oversight on the airport was to be done back in April of 2017.

At that time the New Board included the now apparently departed Corporate Administrator Rory Mandryk, Mr. Paul Venditelli from the Economic Development office and Mr. Richard Pucci who had been named the City's Transportation Manager.

Even if none of those options were available to share some thoughts, Council could have perhaps turned to Councillor Wade Niesh for some themes of interest, he having been appointed to the Airport Authority in late November of last year.

And yet, Mr. Cunningham who may have a few questions to ask in public, will have to wait it seems until someone can find the time to provide for the requested update.

You can review his comments to council from the City's Video Archive below, near the end of the evening's work at the twenty three minute mark.

The approach from Mr. Cunningham, as he has noted in the past, offers a way for the City Council to be more transparent and is a welcome initiative, one which would serve to make Council meetings more meaningful for residents than they currently are.

In many cases in recent years, the Council meetings are over within half an hour to forty five minutes and there has been little in the way of information delivered to the public from the elected members, who often have seem to have few comments to make during the public sessions.

In the staff reply to his inquiry of Monday evening, Mr. Cunningham was advised that staff continues to work on his request and hopes to make some progress towards it.

Hopefully, those that the city have reached out towards to appear at a council session start answering their phones and the call of  City Council to share what they can with the Council members and the public.

You can review some of our notes on developments from the Prince Rupert Airport through our archive page here.

To return to the most recent blog posting of the day, click here.
Posted by . at 9:14 AM