For travellers of the near future, the road across the Northwest will feature a range of electric charging locations, with word today from the Federal and provincial government of plans to expand on clean energy and vehicle infrastructure across Northern BC.

More than $345,000 through the provincial CleanBC Communities Fund and $415,000 through federal government’s Green Infrastructure Stream of the Investing in Canada Infrastructure Program will support these expansion projects. The participating regional districts, municipalities and First Nations will contribute more than $275,000 to the project. 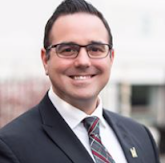 Prince Rupert Mayor Lee Brain, who is currently a member of BC's Climate Solution Council and who has long been an advocate of the EV charging initiative, the focus is on partnerships and sewing seeds for the future.

“This initiative is something that we've been working on at the Charge North Advisory Committee for the last two years and is an example of what can be accomplished when we work together as one to solve common objectives. This infrastructure is key to empowering the use of EVs in the North by our residents and tourists alike, planting the seeds for future economic development and signals that our region welcomes a cleaner transportation future.”

Investment in the EV Stations will see new infrastructure in place in 25 communities across Northern and Central BC, in the Northwest and on Haida Gwaii the line up is as follows:

As for the two stations planned for Prince Rupert, there were no details relayed as to where they may be located in the city or when they are expected to be in operation.

In a Facebook post that followed today's announcement, Mr. Brain did note, that in addition to the two EV stations announced for Prince Rupert today, even more of the charging facilities are in the plans moving forward, including a Level 3 fast charger. 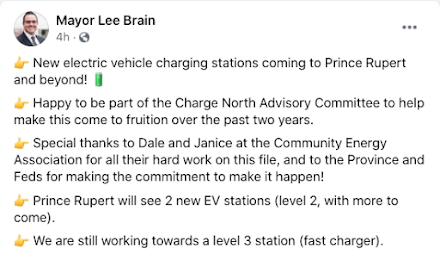 The Prince Rupert Mayor also provided some further notes from Charge North, adding the background to his Social Media field.

More on today's announcement from the Federal and Provincial government can be reviewed here.

Mr. Brain last offered an enthusiastic update for Prince Rupert Council on his desires towards a clean solution for vehicles back in March of 2019, that as Charge North began their planning for the network of EV charging stations of the future.

Some further background on the Northwest hopes towards EV Charging can be explored here.

For more items of note from the British Columbia Legislature see our archive page here.