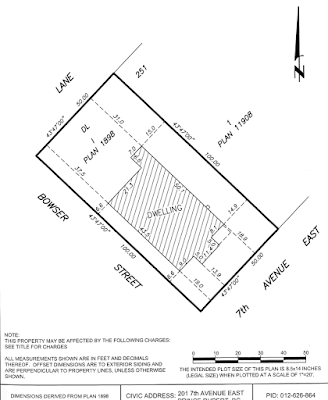 A request for some remediation of a lane that was once on the maintenance list of the City of Prince Rupert has moved forward a bit, with a Seventh Avenue East resident noting that he would take the cost of the work to be done on as his own.
That bit of potential civic generosity, one that perhaps many others in town won't quite be able to provide to the City, was outlined at Monday's City Council Session, as the council members moved an application request that dates back to the Summer of 2021.

City Manager, Rob Buchan outlined the nature of the request and the history of its pause, noting that Council had put it on hold as they contemplated introducing a Local Service Agreement policy in the community, a plan which it would appear has now been put on the shelf.
"This application has been before Council but it was put on hold until Council considered a policy for Local Service Area.  Now that policy review has been completed and Council has elected not to proceed with adopting a policy at this point.
The applicant has been in contact with staff in terms of providing the Laneway improvement that is recommended here and has agreed to pay for the improvements, it's approximately 5,000 dollars of work to make the laneway usable and to a municipal standard." -- City Manager Rob Buchan
Towards that work, the applicant has requested two variances towards bylaw zoning for the work, with  Council now moving the process ahead to public notification for the variance application.
While they had nothing to say on the topic of the application, nor did the Council members take the opportunity discuss the decision to not go ahead with the Local Service program option.
The original request for that variance of the summer of last year, led to a much larger review of how the city should work towards local area improvements, resulting in a proposal that was introduced by the former City Manager Robert Long and Mayor Brain back in June of 2021.
The proposed policy in effect would see local neighbourhood residents come together with the City on a cost sharing basis, to fund local improvements such as lanes and other amenities.
The discussion at that time indicating that it was a rather controversial proposal and not one universally welcomed by some on the Council at that time.
The two competing narratives of the time best exemplified by how Mayor Brain and Councillor Cunningham viewed the topic back in the summer.
"I understand the situation, I mean  I've been here for seven years and I've had many places that have lanes that want upgrades. I mean we're going to approving a paving budget tonight which we only doubled like a year ago and that's for the entire town. And we know that the roads budget for the entire town is well over 90 million dollars, that does not include laneways ... So maybe this is the time to start bringing the local improvement bylaw forward on a lot of different areas because I have a lot of different areas in the community  that want to do stuff like that, and I think that's a way of accelerating the work rather than solely relying on the paving budget " -- Mayor Lee Brain June 2021
"Here we are, we are pushing for people to clean up their houses, improve the neighbourhood. This person comes along, wants to improve their lot and we're going to penalize them now by saying that he can't use the lane that he's been using for the last forty or fifty years, if it wasn't him it was the person who lived in the house before. And we don't know, records don't show who put that lane in there, it could have been the city that put it in fifty years ago" -- Councillor Barry Cunnigham June 2021
Considering they've put the plan on the shelf and didn't make much mention of it at the most recent session, Council members may want to take advantage of some of their discussion periods at an upcoming meeting to expand on the decision a bit for the sake of history and further guidance for the public.
As for the approval of the work for 7th East, Mr. Buchan's review and Council's quick approval to move the process forward can be reviewed from the City's Video archive at the six minute mark.

More notes on Monday's Council session can be explored from our Council Timeline Here.
Further background on past Civic Discussions can be found on our archive page.
Posted by . at 12:14 PM