Federal Fisheries Minister Joyce Murray has kicked the controversial plans to band the use of prawn tubbing down the road another year, with the Minister announcing a suspension of the plans to ban the practice of on board freezing of prawns for the 2022 season.

The announcement came out of Vancouver on Monday and will be welcome news for the industry which had been pushing back on the Federal plan since it was announced last year, with efforts in mid December which included a petition to the government setting the table for discussions.

In her notes from the Monday announcement, the Minister observed the following:

Feedback from the Pacific Prawn Fishermen’s Association (PPFA) and prawn harvesters over the course of the 2020-21 season helped inform DFO’s efforts to clarify existing regulations that apply to the practice of on-board freezing of prawns (known as prawn tubbing) in the commercial prawn fishery. For the 2022-23 Prawn and Shrimp by Trap season, harvesters may continue using existing containers to package frozen prawn tails in liquid, such as seawater, on-board their vessels. This decision gives harvesters adequate time to prepare for a transition to new standards for packaging frozen prawn tails in seawater on-board vessels in 2023.

Towards the 2023 season the Minister outlined how DFO plans to change the current system, that to support DFO officer's work in fisheries observation and enforcement, in effect giving the prawn industry another year to make plans to adjust to the new directives.
For the 2023 season, DFO intends to update Conditions of Licence for the commercial prawn fishery to include requirements for the use of transparent packaging and a maximum packaging volume of up to 710ml – a size commonly used by industry– for packaging frozen prawn tails in liquid on-board vessels. This clarification in the Conditions of Licence will support DFO fishery officers’ ability to readily determine the species, number, weight and size of the catch.
Other plans ahead for the industry include: Implementing a third-party monitoring program for prawns that are frozen in sea water.
DFO also plans to advance work on the traceability of products through the development of labelling requirements for frozen products and the implementation of a tag requirement for live prawns.
You can review Monday's full information release here.
The Monday decision marks the second year in a row that DFO has backed off on its controversial plan.
Fisheries for Communities which was leading the push back against the Federal government plans for the prawn industry hailed the announcement through their Social media feeds on Monday. 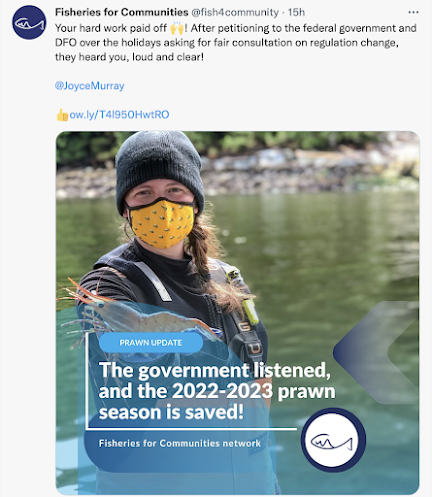 More notes on the Fishery on the North Coast can be explored through our archive page.
Posted by . at 9:05 AM