After a month of travel horror stories, the District of Port Edward is taking the concerns of motorists around the North Coast and Northwest to the Minister of Transportation.

As part of their agenda for their Council Session tonight, the District has included a copy of a letter to Minister Rob Fleming (with a cc for North Coast MLA Jennifer Rice) making note of the state of both highway 16 and 599R (the highway into Port Edward)  through December and January and noting of the importance of the route for the community.

"These two highways are Port Edward's umbilical cord to Prince Rupert and Terrace. The majority of Port Edward residents work and shop in Prince Rupert. Terrace is where many residents receive medical care. I met with a regional representative for our district from MOTI in mid December to outline our concerns. The normal excuses were give, shortage of staff and mechanical breakdowns

There were several times that the highway should have been closed and there were delays in doing so Towing companies were  declining work because they felt the road was too unsafe to travel. We need your help to ensure our emergency responders and travellers are safe" -- District of Port Edward Mayor Knut Bjorndal in a letter to Transportation Minister Rob Fleming

Mr. Bjorndal's correspondence also notes of a lack of communication and concerns at the time that the unsafe conditions should have warranted road closures towards safety for travellers. 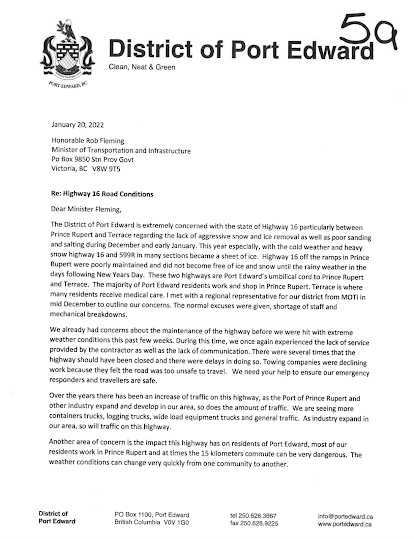 The District of Port Edward Mayor is not the only local politician to outline concerns over the condition of Highway 16 in recent weeks.
As we noted earlier this month, Prince Rupert City Councillor Barry Cunningham also raised some areas of concern over the conditions, that in a conversation with DayBreak North's Carolina de Ryk.
A look back at the month of travel advisories and concerns can be examined from our archive page.
Posted by . at 10:55 AM