A short advisory from the Prince Rupert Port Authority from earlier this week appears to have sealed the fate of the old Northlands Seafood building on the Prince Rupert Waterfront, with the Port offering a notice for those in the area of the work ahead in that area. 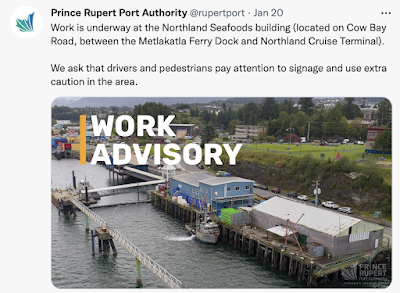 The North Coast Review contacted the PRPA for a bit more background towards what's up on the waterfront and in an email correspondence from Katherine Voigt, Manager of Corporate Communications for the Port, the fate of the structure was outlined.

The Northland Seafoods building currently located on the site is in a state of disrepair and will be decommissioned and removed. It is anticipated that this will take 2-3 weeks, depending on weather conditions. Repair of the dock and substructure will commence upon decommissioning of the current building.

The final step towards its fate probably came with the recent bout of extreme weather from the Windstorm of September through November to the heavy snows of December and January, making for more of that disrepair.
So far it's a quiet day on the work site as thePort Authority moves along with its timetable of demolition.

Just last year, the PRPA had put out a call for proposals for leasing opportunities for the site, looking to make the location another attraction as part of the evolution of that portion of the waterfront.
There is no indication for the moment as to the status of those plans, but should they move forward, they would now appear to be in a new building and not a renovated one from the time of the call for proposals.
For more notes of interest on themes from PRPA see our archive page here.
Posted by . at 11:30 AM