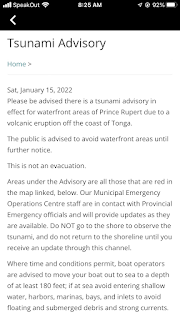 This Morning the City of Prince Rupert issued a Tsunami Advisory for water front areas of the community, with the public advised to avoid the waterfront area until further notice. The city notes in their advisory that this is not an evacuation.

Officials note that they are in contact with the Province and will provide updates as they become available.

For the moment, the advice is:  Do NOT go to the shore to observe the tsunami, and do not return to the shoreline until you receive an update through their information stream

Where time and conditions permit, boat operators are advised to move your boat out to sea to a depth of at least 180 feet; if at sea avoid entering shallow water, harborus, marinas, bays, and inlets to avoid floating and submerged debris and strong currents.

Areas in Red from the map below, indicate where on the waterfront the advisory is in effect

Full City of Prince Rupert Advisory can be reviewed here.

The Province's Emergency Information System outlined a wide list of coastal areas of impact for British Columbians including residents of Haida Gwaii that are currently under the Tsunami Advisory.

Updates on Provincial advisories can be accessed here.
The Province has notes for a Forecast for Wave Activity as follows:
Langara 830AM, Tofino 850 AM
The Oceans Network group is tracking the arrival of waves here. 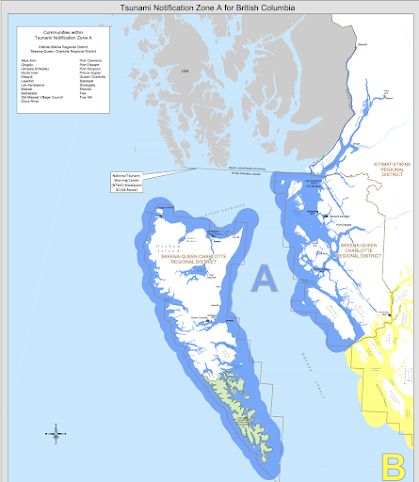 More on the provincial notes is available here.

The US Weather Service has shared satellite imagery of the explosion

Notes on past seismic events can be reviewed from our archive page.