CityWest delivers Distribution payment of 800,000 Dollars to City of Prince Rupert for 2021 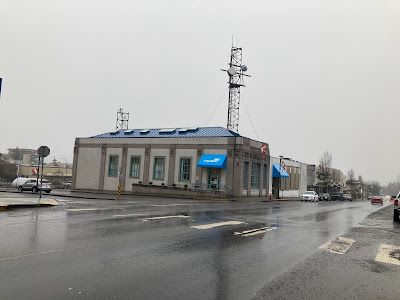 A few weeks later than is the normal timetable, Prince Rupert based CityWest has announced that their 2021 distribution payment to sole shareholder the City of Prince Rupert will be 800,000 dollars.

That makes for a 100,000 dollar increase from one year ago and continues with a climb upwards from the 400,000 dollar level of just a few years ago.

"Our amazing staff overcame myriad challenges last year, and they worked hard to ensure 2021 was yet another successful year for CityWest. We laid the groundwork for a variety of opportunities that will come to fruition in 2022, and in the years ahead to ensure the strength and stability of our company in a very competitive industry." --  Stefan Woloszyn, CEO of CityWest.

In past years, the Distribution payment, which used to go by the term Dividend payment, was announced in the lead up to the Christmas period, often accompanied by a large Novelty cheque along with many members of the City of Prince Rupert appointed Board on hand for the handover.

This year's photo features CityWest CEO Stefan Woloszyn, along with Mayor Lee Brain as the distribution payment cheque is revealed in front of the CityWest head office in downtown Prince Rupert. 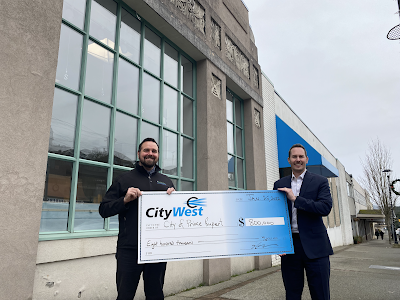 In late December of 2020, when the last CityWest dividend was announced, 700,000 dollars made for the transfer amount, an increase from the level of 2019.

Prior to that, the average distribution payment to the City by their communications company was in the 400,000 dollar range.

In comments today, Prince Rupert City Manager Rob Buchan noted of the success of the last year both in expansion and in return to their shareholder.

“The continued expansion of CityWest into new and remote areas of Northern and Coastal BC, despite the COVID pandemic, is a real testament to the strength of this local company. For another year, they are continuing to support their home community through this increased dividend payment, as well as by employing local people and contributing to local causes. -- Prince Rupert City Manager Rob Buchan.

Some of the expansion plans have been tied into CityWest's ongoing work with the Strathcona Regional District on the Connected Coast initiative.

In their statement from today, CityWest noted how that along with partnerships with Municipal governments and First Nations have assisted in their corporate vision.

The next few years will be a very exciting time for CityWest, based on the work that was done over the course of the year. In 2021, many funding announcements were made that will see CityWest expanding its service areas to the following areas: west to Haida Gwaii, in the communities of Masset, Old Massett, Skidegate, Queen Charlotte, Tlell, and Tow Hill; east to Kitwanga and Fraser Lake; and south to Cortes Island, Denman Island, Hornby Island, and Bamfield.

These massive expansion projects are possible for two reasons. One, the Connected Coast project, a 3,400-kilometre subsea fibre line that will provide backhaul services to rural and remote communities down the B.C. coast to Vancouver, and around Vancouver Island. Funded by the provincial and federal governments, Connected Coast will be operated by a joint venture between CityWest and Strathcona Regional District.

The partnerships that have been forged throughout the province with local municipalities and First Nations bands, which will see a share of the profits generated from those areas invested back into their communities.

In their documentation, CityWest noted that since it spun out into a corporation in 2005, CityWest has provided the City of Prince Rupert with $9.6 million in dividends and distribution payments, as well as over $2.1 million in local taxes and levies.

CityWest is overseen by a City appointed Board of Directors.

You can review some of the notes on the background of the Board, though some of the content of that page does appear to be in need of some updating.

The Full CityWest statement can be reviewed here.

You can review more notes on CityWest from our archive page.