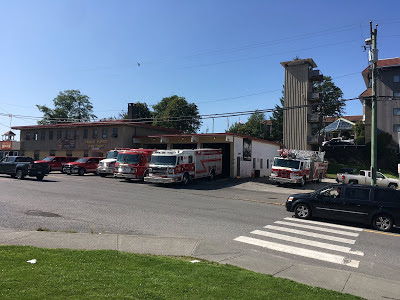 It was promotion day today for the Prince Rupert Fire Rescue department, with the City of Prince Rupert announcing that Deputy Fire Chief Jeff Beckwith has taken on the duties as Fire Chief.

The appointment relayed by an information release from the City today, noting that he takes over from Chief Dave McKenzie who served as Chief for thirteen years of his over 30 years of service with Department.

As for the new chief, today's announcement from the City provided a bit of a look at his career to date:

Beckwith has been with the Department for 23 years and was promoted to Deputy in 2009. He moved to Prince Rupert in 1995, working in commercial fishing before taking a position with the City’s local Fire Department. Prior to that, he also worked as a volunteer firefighter in Pender Harbour for three years on the Sunshine Coast. He is married with two kids, and finds it rewarding to have a position that lets him give back to the community. He said he is looking forward to leading the team of Prince Rupert’s highly skilled staff.

The city also outlined some of what's ahead for him in his new role with the Department.

As Fire Chief,  he will oversee a Department of 20 firefighters and 7 dispatchers, who provide both fire and ambulatory response services to the Prince Rupert area.
Duties of the Chief include attending fires and overseeing fire suppression crews, overseeing fire inspections and investigations, directing public information regarding fire prevention, among other tasks.
City Manager Rob Buchan spoke on behalf of the city about the appointment today
“Chief Beckwith has given many years to the Department, and is well-qualified for the position. These past two years have been especially challenging for emergency responders, and we are grateful for the dedication of both the leadership and staff of the Department for continuing to provide essential care to the community through the pandemic.”
No details of the future plans for now former Chief McKenzie were included in today's announcement.
More on today's announcement can be reviewed here.
Further background on the work of Emergency Responders in the Northwest can be explored here.