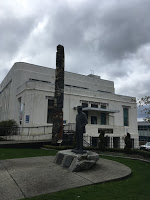 The decision last week to cancel the monthly Committee of the Whole process that is part of the final Regular Council session at the end of a month, seemingly caught a few council members by surprise, with the topic making for some conversation a the end of Monday's Regular session.

The discussion of the fate of the cancelled session started with a question from Councillor Nick Adey who asked why it had been removed from the night's to do list, with City Manager Robert Buchan advising that there were no items available for an Agenda for the Committee Session.

Councillor Barry Cunningham would follow up on that, noting as to how he views the Committee of the Whole as a valuable element of the Council proceedings, particularly when considering the opportunity it provides for residents to speak to council on topics of note or concern to them.

So I'd like staff to look into if we could make some sort of arrangement ... it might be a little problematic, but we could always delay or something like that so if there's something said that shouldn't we could find a way to monitor it to a degree or whatever. But I really think that it's important that we have the Committee of the Whole available for the community."

The two councillors were the only ones of the seven in attendance to speak to the topic on Monday.

Mr Cunningham's contribution to the theme can be reviewed from the City's Video Archive page starting at the twenty four minute mark.

It's not the first time that the Committee of the whole session has made for a Council talking point, the same conversation to a fashion took place in March of 2021, with little learned or acted on since that time it seems.

The Committee of the Whole has been used in the past by community members to speak to Council usually when the sessions are held in public at City Hall, though never really in overwhelming numbers of residents.

Though since the City has shifted to Zoom or virtual sessions owing to COVID limitations,  that participation has been eliminated for the most part for much of the last few years.

Beyond the loss of a valuable engagement opportunity for the public, the use of the Committee of the Whole would seem to be the right format for both Mr Adey and Mr. Cunningham to follow up on some past requests for information sessions for the public through Council.

Last fall Councillor Adey had suggested that the City invite someone from the RCMP detachment to provide an overview of Detachment operations, an invitation that doesn't seem to have been issued, or if so, a session that didn't take place in the public forum of the Council session.

Councillor Cunningham has been the most frequent advocate for making use of the council session to hear from a range of service providers or department heads with the City itself.

The councillor often suggesting that Council have "someone come in to give a report", whether it be an outside agency such as Northern Health or BC Transit, or those within the city's structure such as the Fire Department, the Airport or just a range of department heads at City Hall.

Though other than an extensive session with Northern Health last November,  few of those recommendations have found success in recent years.

As for how the Committee of the Whole could have gone differently, a bit of pre planning could have had the Airport Manager or whomever is handling those themes come in and explain some of the behind the scenes elements of the airport's operations of late.

Or considering the big news that came on Tuesday, Council could have had the CEO from CityWest speak to Council and the public about the Distribution payment for 2021.

A session which could provide some background on how that financial contribution works towards the city's previous loan to CityWest, as well as to offer up a review of the expansion program of the last year, or to address some of the questions local residents may have on service in Prince Rupert.

Use of the Committee of the Whole could even find Council inviting MLA Jennifer Rice to come to the Chambers for an update on her work in the riding, or for council to outline areas of note or concern for her to take back to Victoria.

A check with Councillors Cunningham or Adey may even provide for a few other suggestions for guest speakers to better outline important elements that face the city and how they handle them.

Monday evening's session offers up a good example as to how a Committee of the Whole session could have worked well, considering the Councillors had few items to discuss in a 26 minute Regular council meeting.

Not to overlook that how at the end of the public session, Council then returned to discussions from a Closed session from earlier in the afternoon.

Something which would seem to indicate that on Monday that they spent significantly more time behind a closed door, than with the door open on topics of civic note.

Mostly though the perception is one of making a council that is already somewhat socially distant from the community through Zoom sessions and limited access to City Hall even more so.

The situation exacerbated by removing the one area where the community can still speak to issues in a public setting is one which should be the area of note for council and staff.

As Mr. Cunningham noted and as the City website explains, the Council is still working in Zoom times and yet they have not really spoken much to that decision to continue to meet remotely under the guidance of the Public health Orders.

However, it does appear that some communities have decided to go back to public in house gatherings at City Hall,  as a news report from Monday out of Prince George indicated. 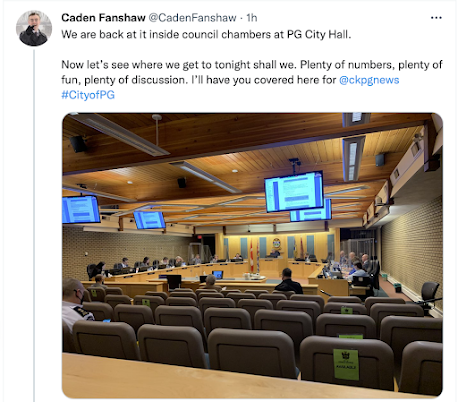 Prince Rupert's Council may want to provide an update on their plans and how long the Remote Viewing exercise will continue; as well as to when they will invite the public to participate and take advantage of an opportunity speak to council if they wish.

More notes on Monday's Council session can be reviewed through our Council Timeline.

A wider overview of past Council discussion themes is available through our archive page.