Having already provided for their first three readings of a Loan Authorization Bylaw towards the proposed new RCMP station at McBride and Third Avenue East, Prince Rupert City Council will decide tonight how they plan to consult the public on the loan request.

With Council to Review a Report from the City's Chief Financial Officer, Corrine Bomben, the correspondence one which outlines the two options that Council has for the consultation with the public.

Ms. Bomben's Report (available through the Council Agenda for tonight) provides a review of the Alternate Approval Process or Public Referendum options that Council will decide upon tonight. 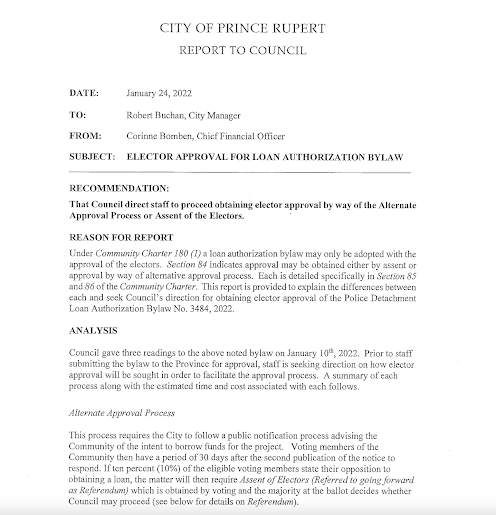 As the CFO notes, the Alternate Approval Process at 7,000 dollars is the least costly of the two options, with the Referendum option one which is estimated to cost $35,000 to take the issue to the public much the same way as a Municipal election.
Considering it's an election year, Council would seem to have two options on that idea, holding off on taking the pulse of the public until the October municipal election when they could include the question as part of the fall municipal vote.
Or in effect pay 70,000 dollars for two of the more fulsome exercises of democracy for 2022, should they choose the referendum option but on a short timeline.
The urgency associated towards building the RCMP structure perhaps one which will make for some of the discussion on the path forward for the Council members tonight.
In the last decade,  City Council members have shown a tendency to make use of the Alternate Approval Process, which puts the onus on the public to outline its dissatisfaction with a proposed financial move, with only a ten percent vote against a measure triggering a wider referendum requirement.
In 2020 Council made use of the AAP option for the Borrowing Bylaws for the Woodworth Dam and Solid Wast Infrastructure project.
City Council also used the AAP for consultation on land sale issues on Graham Avenue in 2016, as well as for the boundary expansion of 2014 that brought Lot 444 inside the city's boundaries.
The use of the AAP option when it came to an Airport Loan authorization in 2013,  was one which came with a caution from two city councillors of the day. With then Council members Joy Thorkelson and Anna Ashley expressing some concerns at that time over the format of the process.
The current Council will have their chance, if they wish,  to outline how they believe the process is good or bad as part of their discussion tonight.
More notes on Tonight's Council session can be explored from our Preview.
A wider overview of past Council themes is available here.
Posted by . at 9:35 AM