Members of Prince Rupert City Council would seem to have very different thoughts on how they should go about securing the 7 million dollar loan authorization for the Prince Rupert Airport.

The subject of the loan authorization process came up for discussion at the September 30th session of council and when it came time to vote, two councillors had a distinctly different belief on what course of action the City should be taking on the issue.

With Council having taken the time to review the background information from City Staff on the Alternate Approval Process (Pages 19-22 September 30th Agenda) that had been recommended, two of the City's Councillors took to the discussion to express the concerns that they had with that proposal.

Councillor Ashley led the discussion regarding her thoughts on the process, outlining how she believed that it was a flawed approach, with concerns over the information delivered to the public and that the nature of that process could leave many residents in the community to believe that they had been tricked into approving the loan authorization. 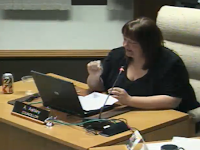 Stressing that she understood the need to move the loan authorization process forward and that repairs to the airport are required, she made her case to take the issue to a referendum.

Explaining that it could be tied in with the November by-election for the vacant seat on Council. During her presentation to Council she outlined that how in her opinion, a referendum process would a more fair  approach for residents to consider, engage them in the discussion and make for a definitive answer to the question of the loan authorization.

"I do not like , I do not agree with the Alternate Approval Process , I have thought about it since it was was put forward  and I think it's a bad process " -- Councillor Anna Ashley

Councillor Garon, spoke to the issue as well, explaining that she was against taking the issue to referendum owing to the need to move the airport renovations forward in as soon a time frame as possible, offering up the thought that unless those repairs were put in place quickly there was a very good chance that the airport might not be usable on some days, depending on any number of items that
currently are of concern there.

Councillor Thorkelson then outlined her concerns over the Alternate Approval Process suggesting that it wasn't very democratic and offering her support to the motion of Councillor Ashley to take the approval process to a referendum.

"I do not believe that it is a democratic process to have people have to put their name, their address down and say they oppose, that's not a vote, that's a petition " -- Councillor Joy Thorkelson

The Mayor expressed his hesitation at seeing the process move to a referendum and following his review of the discussion, Councillor Ashley's motion to take the issue to referendum was defeated and the Alternate Approval Process was passed, though with dissenting votes from Councillor's Thorkelson and Ashley.

With that, the onus is now on Prince Rupert residents to seek out more information on the loan authorization proposal, which would see the Airport take out the 7 million dollar loan through the city's borrowing authority, the loan to be paid off through service fees at the airport, with no cost to the taxpayer.

It will take 10 per cent of the population to express their opposition to the proposal through the counter-petition process for Council to consider the issue and the airport's loan requirement options further.

The discussion over the best path forward could be instructive for future discussions by Council, at some point in the future they will be required to replace both the Fire Station and RCMP detachment in the city, a proposal that earlier this year was deferred until a later date.

If nothing else, from the Airport loan discussions Council should make note that on matters of financial expenditure, more information and a transparent process is something that resonates not just on Council ,but in the community as well.

You can review the discussion from council from the City's Video Archive for September 30th, the Airport loan process starts at the 1:53:00 mark and continues on until 2:17:30)

You can find more background on the repairs required for the Prince Rupert Airport from this blog item  from August.

The media accounts of the Alternate Approval debate can be found below.