Airport Loan Authorization Bylaw next up on the city's consultation list 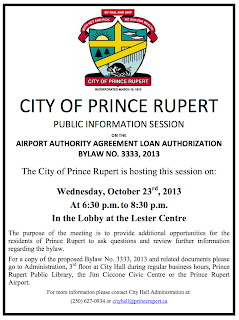 As we outlined last week, the City and its Council have an ambitious list of consultations planned with Prince Rupert residents through the fall.

Last night, it was the proposed re-zoning of a parcel of land on Atlin Avenue that went to a public forum, a controversial topic for some on the West side of the city, but perhaps not for the city at large.

Tonight,  the city introduces a new topic for review, an issue that may be of more widespread interest to the community.

City staff and maybe a few councillors will be in attendance at the Lester Centre tonight, prepared to answer any questions and to offer some background to the contentious, (well contentious for some at  Council) issue of the Airport Loan Authorization Bylaw and in particular, the approach that the city is taking in moving it forward.

At the September 30th Council session, Councillors Ashley and Thorkelson outlined that while they were not against the Loan Authorization Bylaw directing money to the Airport for much desired renovations, they did have concerns over the process that the City has put in motion to move the Bylaw forward.

With both suggesting that they didn't find the Alternate Approval Process, a counter petition mechanism that requires 10 per cent of the population to sign up expressing their disapproval, to be a particularly democratic method for moving the topic forward.

With that background on the story, we arrive at tonight's information session and what may be a helpful barometer for the two Councillors, as to whether the public shares their concerns over the issue.

If attendance is high to the public information session at the Lester Centre tonight from 6:30 to 8:30, then perhaps that 10 percent (estimated to be at around 901 signatures) required in counter petition will be reached.

A benchmark that would set in motion the need for Council to consider other options on the file, perhaps taking the issue to referendum after all. A prospect originally suggested by Councillor Ashley on September 30th, but voted down by Council at that time.

Once tonight's public session comes to an end, Residents have until Tuesday November 12th to submit the required counter petition forms to City Hall.

By the time  they put away all the charts and information sheets this evening, Councillors Ashley and Thorkelson may have a good indication, as to whether there is a groundswell of support for a referendum on the topic.

Or, if the Alternate Approval Process will move forward towards that November 12 deadline without any further public interest.