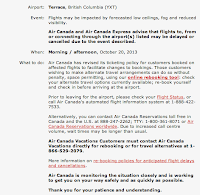 Heavy fog on the South Coast of British Columbia has made for travel nightmares for those looking to make the trek between Vancouver and points north ranging from Prince Rupert through to Prince George  and beyond.

While Prince Rupert's conditions for the most part were very good for flight operations (Terrace flights were diverted here on  Friday), getting out of Vancouver provided for many of the troubles for flight schedules over the last four days.

And when flights did depart from YVR, conditions in other locations provided for challenges to the scheduling.

From Thursday through Sunday, the fog conditions in many BC communities created delays, diversions and cancellations for a number of flights, disrupting travel plans and making for head aches for the airlines that serve Northern BC.

YVR had posted advisories to their website through the three days of fog concerns, with each airline also updating their status during the course of the delays and cancellations.

If one might be looking for silver linings in foggy conditions, the fact that the fog bank arrived this week and not last, is one to look towards.

Had the fog settled in over the busy Thanksgiving Day travel weekend, the impact on more than a few turkey dinners would have been felt far beyond YVR and the south coast.

UPDATE:  Weather Troubles continue on into Monday morning for flights at YVR

UPDATE: Weather conditions continued to plague some flights out of YVR on Tuesday and Wednesday, for further updates on the cancellations and delays to Northwest destinations consult the YVR flight status boards below.


Some of the media accounts of the travel woes of the weekend can be found below: