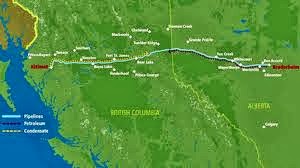 The bid to secure approval for a bitumen pipeline from Alberta to Kitimat has hit the refresh button, as Enbridge is set to introduce a new marketing strategy to outline its case for the Northern Gateway Project.

An approach that from many accounts, doesn't actually mention the word Enbridge in the same sentence that may feature the words, Northern, Gateway or Project.

The new ad campaign for Enbridge, will reportedly feature the Energy corporation's Vice President Janet Holder, introducing the theme that  the "Northern Gateway" is more than just the energy company.

The approach it would seem is one designed to include more of the "stakeholders" of Northern British Columbia into the fold and we imagine, seek to solidify, or gain support to move the project forward.

Ms. Holder appeared with Michael Smyth on CKNW's the Bill Good Show this morning, Smyth previewed one of the ads playing an audio segment featuring the Executive VP, following up that with some discussion and background on the upcoming advertising campaign (CKNW Audio Vault Wednesday, October 2, 8:51 to 8:55 AM).

Some reviews of the new campaign can be found below.

And while the ad campaign has not gone into a full rotation yet, the Coastal First Nations (benefitting it appears from some leaked information) were quick to offer up their own video review of the Enbridge plans, releasing a You Tube presentation that provided their response to the new marketing plan of the energy company.

Art Sterrrit, the executive director of the Coastal First Nations outlined how the organization came to learn of the new Enbridge campaign, as well as how they decided what their response to that new approach would be.
.


.
While the dueling ad campaigns prepare to begin their runs, there was a new development on the Northern Gateway front this week,  with word that the Provincial Government had issued 11 permits to conduct preliminary work along the proposed pipeline right of way.

And while the road thus far has clearly been a rough one for Enbridge, company officials still seem to be keeping to their timetable and are bullish on their prospects.

In a Canadian Press story from today, Enbridge officials expressed the thought that while they expect challenges from opponents, they anticipate the pipeline to be running by 2018.

It may not be quite as smooth a process as they might like however, with opponents to the plan still ready to raise their concerns and take other action to halt the pipeline project.

Last week, the NDP issued a cautionary note that it believed that the BC Liberals were about to reverse their field when it comes to the pipeline question, while a BC Aboriginal Group was seeking a meeting with the UN regarding the proposed Gateway project.

This flurry of advertising plans, announcements and talking points all suggest that after a short hiatus, the discussion and debate of the Northern Gateway proposals may once again be ready to heat up.
Posted by . at 11:37 AM