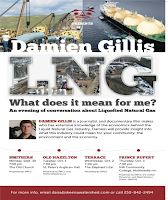 The Skeena Watershed Conservation Coalition has been of taking its message on LNG development to the Northwest and Thursday night at Northwest Community College, North Coast residents can learn more about the concerns the coalition has over proposed development.

LNG: What Does it Mean for Me?  is the title the tour has taken on, with Damien Gillis a journalist and documentary film maker providing the overview for the night, outlining what he believes could be in the future for the North Coast when it comes to development of the LNG industry in the region.

His particular focus for the night will be that of community, environment and economy. Those interested in more background on his presentation can explore this link to the Skeena Watershed Coalition website, which outlines many of the talking points on the theme of LNG development in the Skeena Watershed.

Of interest to residents of the North Coast will be his observations of the proposed terminal development sites of Lelu and Ridley Islands.  Locations, as part of the Skeena Estuary, that the Skeena Watershed Coalition does not believe are the best locations for industrial development.

That is a theme that Prince Rupert City Councillor  and UFAWU representative Joy Thorkelson had explored previously at City Council sessions .

It's of note that along with the Skeena Watershed Conservation Coalition, UFAWU is a co-sponsor of tonight's presentation at NWCC.

The information session gets underway a 7 PM in the multi-media room at the college, it marks the final stop on the tour of the Northwest that Mr. Gillis has been on, previous stops included Smithers, Moricetown,Terrace and Old Hazelton.