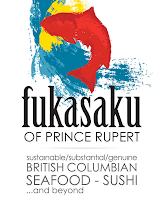 The Prince Rupert dining scene will soon see one new addition to your options for  night out, as  Fukasaku of Prince Rupert begins the countdown towards its opening in late October.

The restaurant located at 737 2nd Avenue West (once home to Rain ) in the downtown core, is preparing to tempt Rupertites with the possibilities of British Columbian Seafood, Sushi and much more.

A facebook page outlines some of the progress so far in their work up towards opening, some furniture acquisitions from the local Argosy Gallery, as well as the process of hiring on staff which has been underway the last few days.

Yet to debut for the new dining experience in the city, is a website for the restaurant offering more details on what may soon be available on the menu, as well as a twitter feed, an important part of spreading the word these days through social media.

Prince Rupert has seen some life come to its restaurant scene in recent months, Stiles Place Seafood and Grill opened it's doors over the summer, taking over the space once held by Pizza Hut in the city.

And work continues just off of Mariner's Park, where it's believed yet another new downtown restaurant will soon set up shop.

Along with the flurry of gastronomic options, Thirsty Prince Rupert residents await a new Craft Brewery and its tasting room. As The Wheelhouse Brewing Company, located just up the hill from the Atlin Terminal puts the finishing touches to their home and makes preparations to open its doors this fall.