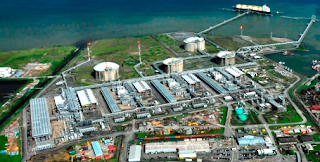 As part of their preparation for tonight's council session, when the city's councillors settle into their information to Council package, they will find the promised overview of the Mayor's recent trip to the Caribbean.

That was the whirlwind trip from October 6-11where Mayor Mussallem, BG Group representative Herb Pond and a delegation of First Nations leaders from the Northwest toured the BG Group LNG facility Atlantic LNG at Point Fortin, Trinidad and Tobago.

As we reviewed on the blog earlier this month, the Mayor mentioned the trip with a short review as part of his Mayor's notes at the close of the October 15th Council session, advising council that he would circulate some of the information that he had brought back with him from the Caribbean.

City staff delivered that material on October 23rd, though a quick scan of the document would suggest that some of the Councillors may want more details. Looking perhaps, to receive a more detailed briefing from BG officials on what impact the planned project may have on the region.

Council explored that possibility at their October 15th session and we imagine that while informative, the handout the Mayor has provided probably won't answer many of the questions that some of the Councillors may have regarding the proposed development.

The after the fact announcement of the trip came as a bit of a surprise to many and was one that apparently has left a few hard feelings with Port Edward officials.

It would appear that Port Ed representation was overlooked when the invites were issued, a rather strange oversight considering that  any LNG development in the region would have some effect on Port Edward. Though post trip, it does appear that some fence mending is already in place on those concerns from the community.

For those who may have an interest (hello Port Edward!) in what the Mayor and the delegation were provided with for reading material, the BG Briefing notes are available on the city website, as part of the Information for Council package of October 23rd. (click on the number 14 item in the table of contents to access the information)

You can review more on the variety of LNG proposals for the Northwest from our archive pages, we have two sections for your research, a project by project archive and a larger file outlining all of the issues regarding LNG development on the North Coast.
Posted by . at 10:18 AM

Email ThisBlogThis!Share to TwitterShare to FacebookShare to Pinterest
Labels: Infornation package for Council on Mayor's tour of the Point Fortin LNG terminal at Point Fortin Trinidad and Tobago