From one Island to another, Mayor Musallem's LNG primer 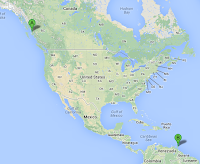 One of the more interesting of presentations at Tuesday evening's City council Session was an overview of Mayor Jack Musallem's recent trek to the Caribbean.

Where as part of a trip sponsored by the energy company  BG , the Mayor was among a delegation from the Northwest, which  learned more about BG Gas operations in Trinidad and Tobago.

The Mayor had no slides or videos to show off, but did provide a thumbnail sketch of the whirlwind trip that brought he and representatives of Lax Kw'alaams and Metlakatla to BG's Point Fortin LNG operations in the Caribbean nation.

A location in which BG has been operating in since 1989.  Their LNG terminal was developed at the Point Fortin location in 1996, with it's first start up of operations in 1999.

All in all, it was a rather time compressed visit, where the delegation from the North Coast received an overview of the LNG plant operations, as well as some background on the Natural Gas company and it's efforts in that community.

During the course of his presentation, the Mayor reviewed some of the safety, security and industrial procedures that he found in place at BG's Caribbean terminal, as well he recounted some of the community involvement that  the company offers to residents of the region.

He offered up his thoughts on how he believes these companies approach a community to base their operations there and how they seek to support the local economy.

The Mayor also outlined that it is his understanding that the company makes efforts to hire local residents and support the local school system, so as to train those in the community for future jobs in the LNG industry at their facility.

He provided a snapshot of the timeline of investment on the North Coast, suggesting that perhaps the second quarter of 2016 may bring some forward momentum, though with the provision that the timeline could it could change.

Mayor Mussallem also touched on the desire of the company to explore the social aspects of a community, to be accepted by a community and to assist in getting the community "job ready".

He also reviewed some of their community involvement projects from athletics and education and he touched on their environmental activities, including animal habitat.

He wrapped up his observations on the tour of the region, with a review of the level of employment there, the nature of the local involvement in the operation and how the company is received in the community.

You can review the full review of his journey as part of his Mayor's Report, the BG trip arrives at the 39 minute mark of the council session, carrying through to the end at 45 minutes. (see council video archive for October  15th here)

At the end of his presentation, Councillor Thorkelson was the only member of Council who had questions of the Mayor regarding the trip.

She asked for the Mayor to provide a more detailed review of his trip at a future session of Council, allowing time for questions and input to his observations.

She then outlined some of her concerns over the information flow regarding LNG development on the North Coast and how more information is required for the community on the issue.

The Mayor advised that Council that he had an information package on his trip which would be provided some time next week, which he hopes might answer some of their questions.

He observed that owing to the short time frame of his visit he might not have all the answers that Council might have questions about.

He went on to suggest that if after reading over his information package, Council should still have questions on either the Trinidad operations or on BG's plans for the North Coast, then the possibility of a presentation from BG representatives to Council could be sought out.

For Rupertites that aren't on the distribution list for the Mayor's report, a little surfing on the Internet can provide for some background information on the operations in Trinidad and Tobago.  Information on the company and its efforts in the Caribbean can found both on the BG website and from the webpage from the Terminal at Point Fortin.

The processing of LNG at Point Fortin is explained in detail from this link to a trade publication on the LNG industry.

The most recent listings of the exports from Point Fortin, suggest that a large portion of the LNG shipped out of Point Fortin would seem to be destined for  either Europe or South America.

You can learn more about BG Gas and their plans for Ridley Island from our LNG archive page.

CFTK had the first of the media reviews of the Mayor's travels with this report.