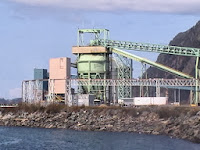 For Prince Rupert's commodity export terminals, 2013 is shaping up to be a pretty impressive year.

The latest figures are in and for the Port of Prince Rupert sharing the good news for both Ridley Terminals and Prince Rupert Grain,  highlights that 2013's volumes are trending in the right direction.

On Monday afternoon, the Port boasted of the positive numbers in a tweet through their social media account on Twitter , offering up that Prince Rupert Grain has had a year to date increase of volume of 12.7 per cent, while over at Ridley Terminals the increased volume to date is 11 per cent.

In a press release issued today, Canadian National outlined some more background on the anticipated forecast for Western Canada crop production, which with some 60 million tonnes expected to be harvested, would make for one of the largest harvests in Canadian history.

Certainly good news we imagine for Prince Rupert Grain, which is a key participant in Canadian National's supply chain and a vital terminal for Western Canadian grain products.

You can review other items of note from all of Prince Rupert's various terminals from the links to our archive pages below.

Email ThisBlogThis!Share to TwitterShare to FacebookShare to Pinterest
Labels: Volumes increase at PRG and Ridley Terminals