By the frequency of the visits to the Northwest of late, the Provincial Liberals are clearly attaching a fair amount of interest to potential developments across the region, with two more BC Liberal Ministers making the trek north over the last week.

Todd Stone, the Minister of Transportation and Infrastructure, along with Teresa Wat, the provincial government's Minister of International Trade did the Northwest circuit last week. With both looking over the latest developments of the Port of Prince Rupert, before heading to Kitimat to learn more about the progress of some of the proposed projects in that region.

Both explored the Prince Rupert waterfront region and offered up comments over their thoughts on the future of the region, with the Transportation and Infrastructure Minister speaking to some of the safety issues of note in recent months.

Their stop over in Prince Rupert and the Northwest was chronicled in a video feature by the Northern View, as well as a number of items on CFTK TV.

The subject of BC Cabinet Minister visits came up at Prince Rupert City Council recently, with a number of Councillors expressing their frustrations that access to the visitors from the cabinet of Premier Christy Clark seemed limited at times.

At the September 9th session of Council, Councillor Thorkelson suggested that one cabinet minister in particular, Rich Coleman, the Deputy Premier and Minister of Natural Gas Development, be asked to return to Prince Rupert and appear in front of council for some discussion regarding LNG issues.

We're not sure if the most recent visitors checked in at City Hall on Third Avenue during their stop over, but the clearly were meeting with a number of people around the region, at least that seems to have been the case, judging by the string of entries on their twitter feeds over the last week. 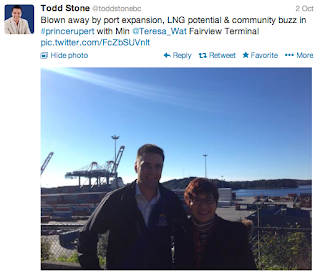 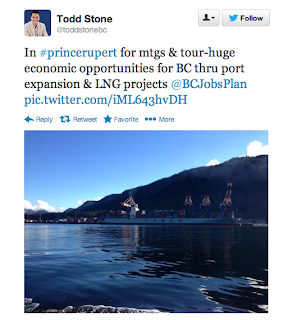 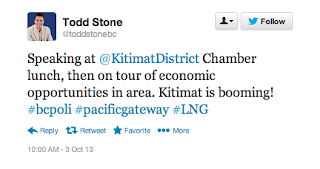 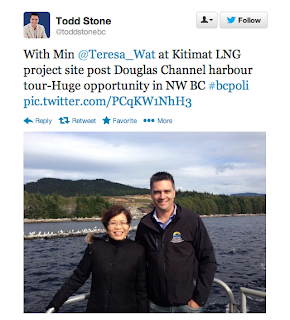