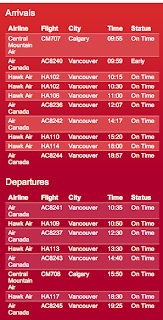 They're trumpeting the latest statistics at the Terrace airport, as passenger levels reached the highest ever monthly total in the month of August.

The August passenger load through Terrace was 18,026, which will be the new benchmark for the airport until they reach a higher level of passenger use, something that may not be too far down the road.

Stats released on Monday showcase the growing volume of passengers making Terrace their destination and departure point of choice, with total passenger numbers to date of 109,760 for 2013.

A fair amount of that increased volume is being attributed to developments and projects in the region, in particular the industrial work taking place in the Kitimat area of late.

With the August numbers in, Terrace airport officials are looking forward to the September results, which they believe will show increases as well.

As part of this Terrace Standard story, it was noted that the Terrace airport benefited in September from some technical issues in Prince Rupert.  As the instrument landing system at YPR  had been out of order temporarily in September, resulting in Rupert bound flights to be re-directed to Terrace during the foggy days of the month.

And while he did not break the numbers down for the month of August, he did advise that the numbers at YPR showed that there has been a 4.43 per cent increase in passenger levels for the first half of 2013.  (see City Council video archive at 1:10:50 to 1:11:10)

One key addition to the Terrace airport flight board will be when WestJet begins it's  twice a day Terrace to Vancouver service in November.

The announcement earlier this year that WestJet would serve the Terrace airport was a major catch for the city and one that will no doubt keep their monthly numbers climbing steadily in the year ahead.