4.0 magnitude quake off of West Vancouver Island recorded this morning 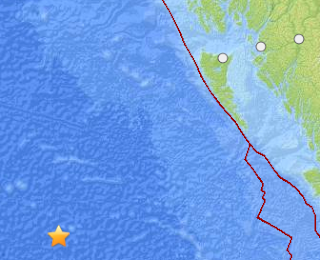 The seismic plates shifted earlier today along the West Coast, but it's doubtful that anyone felt the shimmy, as a 4.0 magnitude quake rumbled along the ocean floor, West of Vancouver Island.

The temblor was recorded at  9 AM this morning, some 775 kilometre SW of Masset on Haida Gwaii, far enough off the shores, that no noticeable effects were felt, nor was there any form of tsunami warning generated.

Thursday morning's temblor is reminder of the active nature of the fault lines of the West Coast, it was almost on year ago that a major 7.7 quake struck the fault lines along Haida Gwaii, that reminder of our location on the seismic plates took place on October 27th, a quake that rattled the North Coast as well leading to a Tsunami Alert for the city.

You can review the seismic shuffles since that major quake from our Archive page
Posted by . at 8:11 PM

Email ThisBlogThis!Share to TwitterShare to FacebookShare to Pinterest
Labels: 4.0 quake off of W Vancouver Island this morning