BC Conservative Leadership Hopeful making swing through Northwest BC

With the BC Conservative Party looking to make a change at the top, one of the would be leaders of the provincial party is planning a quick trek through the Northwest this week.

And while the BC Conservatives' leadership race isn't quite as news generating as the one now underway to replace the NDP's Adrian Dix, for those Conservative supporters on the provincial scene, these are key months to keep the focus on their agenda for British Columbia.

Dan Brooks, one of the leadership candidates for the position recently vacated in July with the resignation of John Cummins, is currently touring the region looking to introduce himself and secure support for his leadership bid.

His stop in Prince Rupert on Tuesday night (a little advertised stop over) part of a tour of the region that also takes him to Smithers, Terrace, Kitimat and Burns Lake. 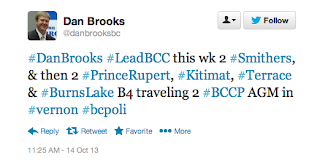 It's seemingly a rather low profile tour of the Northwest for the leadership hopeful. With an itinerary that offered up little more than place names on the map. No times or locations for the get togethers with the public were advertised, near as we can tell.

So, if there were any potential new Conservative supporters to court, we're not sure how they would have be courted. This under the radar approach, would seem to be a rather strange concept for a political party that still has a pretty low profile in the region.

For the most part, the tour seems to be more designed to touch base with those that are already in the Conservative fold.

Mr. Brooks has however, made time to show the flag with the media . Making time for a few stops with a number of media outlets in the region, perhaps leaving the more public events to a later date, should he find success in his quest to lead the party.

The Northwest tour is part of his lead up to the party's next Annual General Meeting in Vernon on October 18th, where the first of the real political moves are expected to take place in the quest for the party leadership.

It's at that gathering where further details are expected to be outlined regarding the leadership convention, scheduled for April of 2014.

Brooks , who has been a long time resident of the Vanderhoof area (though he recently moved to the Kamloops area to commence his campaign for the leadership) , will be looking to learn more about the Northwest and perhaps seek out support from dis-satisfied voters, who may find the BC Conservative message to their liking.

It was a message however that in the most recent provincial election, that didn't seem to capture much in the way of traction with the province's voters.

Instead, with the polls suggesting an NDP government may have been in the offing, many potential Conservative followers chose to remain firmly in the BC Liberal camp, part of the rather decisive  return to government for Premier Christy Clark.

An accomplishment that shocked many pollsters and political observers in the province.

Brooks, was a candidate in that provincial election coming in third in the Nechako Lakes riding, gaining 12.6 per cent of the popular vote in the riding which returned John Rustad to office as part of the Premier's cabinet.

Mr. Rustad recorded 54.5 percent of the vote in that campaign, with the NDP candidate, Sussane Skidmore-Hewlett second at 27 percent.

As part of bid to claim the BC Conservative party's leadership, Brooks has developed a website portal to outline his platform, concerns and core beliefs as part of his run for the leadership.

He also has a twitter feed which updates potential BC Conservative followers as to the latest developments with his campaign and the party.

Brooks is one of two declared candidates thus far to throw their hat in the ring for the party leadership, with Vancouver businessman Rick Peterson launching his campaign in late September.

Some background on Mr. Brook's political past and where he would like to see his future can be found below.