The mainline, may be a ghost line by the end of the month

The rail line between Prince Rupert and points eastward may soon be a very quiet place, as discussions between Canadian National Railroad and the Teamsters Canada Railway Council seem to have broken down, with the clock ticking towards a potential labour disruption.

“We’re extremely disappointed by CN’s refusal (to extend the mediation period),” ... “The railway uses an old tactic: pointing a gun to its workers’ heads to force them to make concessions.”-- Teamsters Canada Railway Council spokesperson Roland Hackl, speaking on the latest developments in negotiations with Canadian National

The talks between Canadian National and the Teamsters Canada Railway Council which represents conductors,  trainmen, yardrmen and traffic coordinators, recently entered a cooling off period, with a deadline of October 28th counting down the negotiating process.

Though as the Teamster's outlined in a recent press release, even with the cooling off period, things don't appear to be going particularly well at this point.

In their comments, the Teamsters provided some background on the state of negotiations, the nature of the 21 day cooling off period and the countdown which now leads us nicely up to that key date of October 28th.

A strike at Canadian National would have a large impact on the Port of Prince Rupert, with containers, 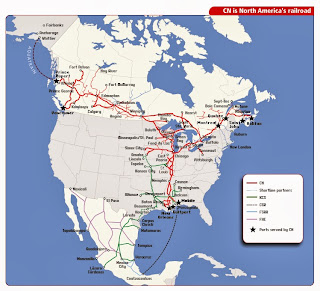 wheat and coal shipments all key aspects of the industrial and transportation base that use the CN line in and out of the port. Providing employment for many at the Container Port, Grain Elevator and Ridley Terminals to name a few.

It comes at a particularly critical time for the grain industry and as we outlined on the blog earlier this month, for throughput at Prince Rupert Grain which recently championed its latest numbers.

Last week CN outlined the prospects of a bumper crop for the fall harvest currently underway and for the large volume of grain shipments for export markets anticipated to pass through Canadian ports, including Prince Rupert.

That bounty of crops and the critical requirement of transportation to the Canadian economy however, could make any shutdown of one of the nation's two large railroads a rather short thing.

There is already some thought being expressed that any strike/lockout situation could face Federal intervention shortly after any labour dispute reached the off the job phase.

Parliament returned to its  business with yesterday's Speech from the Throne, so any labour troubles at the nations largest railroad no doubt would make for discussion and potential action from the Federal Government.

The Teamsters in fact pointed to that very possibility in recounting that back to work legislation has been used twice before in disputes between the Teamsters and CN, with legislation put in place in both 2007 and 2009.

Decisions from Government that ended the labour disruptions, but seemingly not the lingering issues for the two sides.

The talking points for union members can be found from this update from the Teamsters Canada Rail Conference.

For it's part Canadian National has not  issued any advisories to their website on the state of negotiations and what the future may hold.