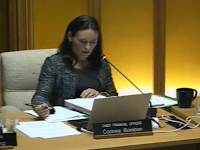 The City of Prince Rupert's Chief Financial Officer outlined a number of key concerns that the City has when it comes to their infrastructure check list.

Speaking to the Standing Committee on Finance and Government Services, Corinne Bomben provided some background for Committee Members as to the challenges that Prince Rupert faces with a small population base, but some very large projects on the horizon.

"Our city is made up of approximately 14,000 people. Our people can't do this alone. With industrial developments years from adding to our community's tax base, Prince Rupert lacks the revenue to invest in the infrastructure that will enable the economic development to support the unprecedented interest for industrial development in the northwest."-- City of Prince Rupert, CFO, Corinne Bomben addressing the Provincial Government's Standing Committee of Finance and Government Service.

The City's CFO outlined the three major infrastructure issues that are of high concern at the moment for City Hall, costly projects that weigh heavily on Council's minds in the current financial climate that the city faces.

The Water system which needs upgrading, the 100 year old dam and raw water supply line is not easily accessible, providing many challenges to the city should emergency response be required. The age of the pumping system is another concern, as well as the possible troubles that could come from the two submarine lines that service the city.

Ms. Bomben outlined for the Committee that the cost of replacing the water line components, upgrade the dam and construct a proper access road could reach as much as 12 million dollars.

Add into the discussion, the fact that approximately 25 per cent of the city's main trunk water system is travelling along pre 1925 lines and the challenges increase for the City.

Transportation was next up on the list, with the nature of the city's three wooden trestle bridges of particular concern, all of which are over 70 years old. The replacement cost for each would be around 2 million dollars.

Liquid waste concerns also were of note for the city, particularly with provincial requirements for the proper treatment of waste coming into effect.

Ms. Bomben outlined that while the province is looking for a secondary treatment of liquid waste, at the moment the City doesn't even have primary treatment, the estimated cost of providing for separation of storm and sewer lines to be at some 130 million dollars.

You can review her entire presentation from the Committee minutes, she appears at the Committee table from 1615 to 1620 on their timeline.

The Committee is conducting hearings across the province as part of Budget Consultations, they are to deliver a report on their findings by November  15h.

You can examine the entire day of presentations in front of the Committee from our article of October 10th, which reviewed their Prince Rupert session.