Members of Prince Rupert City Council are going to have to be quick studies of their day planners, as they have a number of public consultations on the way.

And if the plans of some of the City's councillors come together, many more consultations could be on the horizon for the fall.

At Tuesday night's Council session the prospect of much more consultation seemed to be the working theme of the night.

Tuesday's meeting outlined the desire of council for a meeting with the Airport Authority, a get together designed to discuss a wide range of items from airport services, to a safety and security plans.

Then, after hearing of Tuesday's accounts from the Mayor, regarding his recent travels to the Caribbean, the impression left with observers on the night, is that the prospect of representatives of the BG group being asked to come to council seems rather likely.

An information session that would outline more of the plans of the Company and the impact of the LNG industry on the region.

Tuesday also provided for the path ahead when it comes to the Community Enhancement Grant's to be awarded by the City.  As Council advised that they will be looking for a meeting with the public in November, to learn more about which services and offerings that Rupertites believe are the most desired in the city.

The meeting planning however doesn't appear to stop there.

When you go through the minutes of previous Council sessions, it seems that at almost every session there's a request from Council, for someone to come on down and sit for a while, ready to offer up answers or provide information for Council to consider.

Still to be heard from and perhaps before the year is out, will be upcoming Public Sessions on the Airport Loan process, the Moresby Park land rezoning issue and not to be forgotten, the most recent request for a public forum with Canpotex, that to discuss the state of their Potash terminal plans.

Council would also like to discuss housing issues in the community with BC Housing and have the RCMP and trucking industry reps address the flurry of recent container truck incidents in the city.

Not to mention their plans for the Regionalization of the Prince Rupert Airport and the proposed municipal boundary expansion, a topic that will surely require a fair amount of discussion.

When they aren't seeking meetings, Council has been busy expressing their disappointment at lost opportunities for talks.

In particular they are seemingly upset that the string of provincial cabinet ministers that recently visited the city, visitors who it seems never found time to come and share some thoughts with them.

Then there's the whole run up to the Budget consultations, the planning of which is to be set up shortly and a topic that Councillor Thorkelson addressed on Tuesday night.

Offering up some of her observations for Council to consider on both Budget Planning and the need to determine a Strategic planning process.

"I certainly am in favour, that we do as much of the budget planning in public meetings, but also if there is something difficult to understand sit down and workshop on some decisions" ...  "I was concerned that we not be as black and white as we were last year. We've never made any decisions in private. All of those decisions are made in public meeting, but I want to make sure that we have a chance to workshop on some issues. -- Councillor Thorkelson on the process of Budget considerations and Strategic planning.

The Councillor's review of Council's dedication to that cause can be found at the twenty seven minute mark of the October 15th Council session, available for viewing at the City's Video Archive.

Of course, her theme that Council always makes decisions in a public meeting, might bring a few hands to the air with a question or two.

Especially those that might be thinking back to the recent budget consultations of the spring of 2013.

At that time, Council and the Mayor heard from many citizens through a much celebrated public forum at the Civic Centre, taking in all that public advice for consideration.

However, many of those that shared their views with Council were a tad surprised to learn that but a few days later, that a deal had been reached outside of the public view with CUPE, the union representing the city's workforce.

The day featuring the surprise announcement of a solution to the financial discussions, one that Council seemed hesitant to share the details of.  An arrangement that has to this day, has not been revealed to the public.

That made for a situation that raised more than a few eyebrows last spring as the City's financial deliberations came to an end and they revealed that they had a decided on a fourth option to address the city's financial situation, one not previously presented to the public. 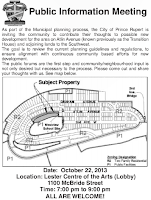 Combine that particular issue, with the large volume of in camera, or closed to the public sessions, that this council has held in the last year ( 24 and counting) and the concept of active public consultation perhaps might not resonate quite as much with the public, as Council might like to think.

Whether past instances leave residents cynical about municipal participation remains to be seen, in the end when it comes to audience participation, it will all probably depend on the issue.

The Moresby Park information meeting of October 22nd already seems destined to attract a large crowd, an example of one issue that hits the right buttons, while some of the others on Council's consultation list may not quite interest the public quite as much.

Hopefully, City Staff will be able to balance the workload of the many, many requests to appear from City Council.

Or at the least order up a fairly healthy supply of coffee, helpful for all we imagine, for what appears to be some rather lengthy Council sessions ahead through the fall.

Email ThisBlogThis!Share to TwitterShare to FacebookShare to Pinterest
Labels: City seeks many consultations in the fall, October 2013