They closed the books on the April Minerals North gathering in Terrace and when the bills were paid and the number crunching was complete, the organizing committee for the conference was able to deliver a number of cheques to Terrace area groups.

Among the eight groups that received a share of the 38,000 dollars was Northwest Community College which received money for $5,000 in scholarships for the Trades or Mining Programs as well as $10,000 in funding to help with upgrades to equipment for the Culinary Arts Equipment. 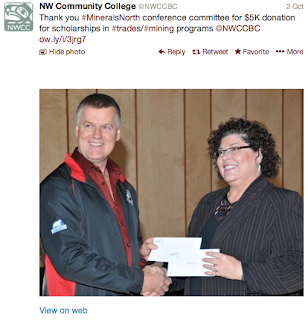 As we outlined on the blog back in April, the Minerals North conference attracted a large number of visitors to the Terrace region, indicative of the soaring interest in the mining sector in the Northwest.

It's not the first time that NWCC has benefited from the Mineral North conference, during the April gathering  it was announced that the college would receive 100,000 dollars from Seabridge Gold,  destined to provide development of a mobile trades vehicle.

You can learn more about the Mining program at NWCC from their website.

The remaining 23,000 dollars in Minerals North funding was directed to a number of other groups in Terrace, the details of where that money was allocated can be found in this item from the Terrace Standard.
Posted by . at 11:07 AM