"A year to forget" for the Potash Industry 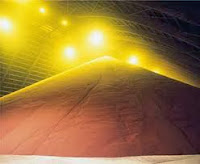 The returns for the Canadian potash industry continue to provide for a less than robust picture, as a number of reviews from the last few days highlight.

With concerns over pricing and the recent turmoil spurred on by the dissolution of a Russian cartel, the fall has made for a turbulent period of time for the providers of the commodity leaving one financial observer for the Business News Network to describe 2013 as a year to forget for the Potash industry.

In amidst all of that turmoil, is the North Coast, waiting patiently to learn more about the prospects of moving the proposed Canpotex potash terminal forward. Though considering the nature of the financial news of late, that we imagine might seem to be the thing of the back burner for the immediate future.

As we outlined on the blog two weeks ago, City Council recently issued a request for Canpotex officials to make the trip west to update the community on their plans for that terminal. A proposed get together that consider the company's more immediate worries,  most likely won't require the City to book a hall for any gatherings in the short term.

Council outlined it's desires for that meeting back on September 9th, so perhaps we shall hear an update from the Mayor on the status of those plans at an upcoming council session, maybe even at the one scheduled for tonight.

While we wait, a few more reviews of the potash picture.

The key takeaway from it of lower share prices for investors and lower than anticipated sales volumes from the first three quarters, though the company is hoping to see improvement in the fourth quarter numbers.

Some background on the most recent reporting on the state of the potash industry can be found below.

Our full review of the Canpotex project and news developments surrounding it can be found on our archive page.
Posted by . at 8:15 AM