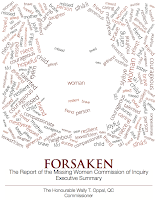 There may not be much happening at the Legislature these days, the fall session being a non session if you will, but for opposition MLA's the work continues, as they seek to raise issues of concern with the government.

Last week the three Northwest NDP MLA's, outlined their concern over the lack of  attention provided by the Liberal Government on the recommendations from the Missing Women's Commission.

With Jennifer Rice, Robyn Austin and Doug Donaldson all observing that the Liberals are not moving fast enough on the report, one that was delivered in November of 2012.

And while, in their press release, the NDP may be employing a bit of  hyperbole in their claim that the Liberals are burying the Commission's report, "pulling down the Commission's website" as they put it, (the report itself and the recommendations from it, are still fairly easy to find with a simple google search see here), they are correct on the rather glacial pace of the Liberals attention to it.

When the Commission, led by Justice Wally Oppal crossed the province seeking out information and possible answers, the prospect of action seemed fairly high.

However as the months slip by, the report it seems runs the danger of finding space on a dusty shelf, like many other reports, on any number of topics before it.

That is a fate that should not arrive for the Missing Women's Commission report.

Learning where the Government stands on the recommendations and whether they agree, or disagree with the point by point recommendations that came from the findings is something that the public should hear.

Then Minister of Justice and Attorney General, Shirley Bond pledged at the time of the report's delivery to immediately begin the process of implementing his recommendations. Though it would seem that the term immediate perhaps has a different timeline in Victoria.

Reviewing the many issues that the Commission raised is something that should be addressed sooner, rather than later.

As Doug Donaldson, the NDP's critic for Aboriginal Affairs rightly points out, "What is the point of having a commission if the government isn't going to act on the recommendations in a timely manner?"

A very good question, and one that deserves an answer, quickly from the Provincial government.
Posted by . at 8:45 AM