One year ago, Haida Gwaii and the North Coast rumbled and a reminder was sent 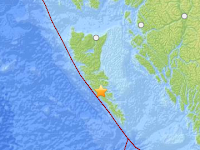 It was one year ago today, October 27th, 2012 that the North Coast, Haida Gwaii and Southeast Alaska received a fairly significant reminder of the active nature of our seismic lines along the Pacific coast.

It was on a Saturday evening,  at four minutes after 8 to be precise, that the strongest earthquake to rattle Canada in sixty years struck 139 kilometres south of Masset, on Haida Gwaii.

A 7.7 shaker that sent residents of the Island seeking higher ground, fears of a tsunami washing ashore moving them quickly to a more secure location.

That same fear of tsunami, set in motion a string of events in communities up and down the North Coast, as residents assessed their own situations and took the required measures to make their communities as safe as possible.

In Prince Rupert on October 27th, 2012, that meant a door to door  request of those living close to the waterfront and in marina areas to head for higher ground, the city opening up its Command Centre at City Hall shortly after the quake had struck to coordinate the response and required action.

Activities at the city's main industrial terminals on the waterfront came to a standstill as officials awaited word on the prospect of a tsunami for North Coast and Alaskan communities, as the evening moved forward, that threat diminished significantly, the all clear being issued by 11 PM and the emergency command centre shut down it's operations.

A hearty reminder, but not much more than that, but an event  that definitely added to the excitement for a North coast weekend night.

Significant after shocks would rattle the region, mostly on Haida Gwaii over the following months, a reminder of the major event and an indication to make preparations for if, or more likely, for when the earth should shake again.

One rather significant follow up seismic event took place in January of this year when a 7.5 quake rattled South East Alaska, once again putting Prince Rupert under a brief tsunami watch.

With last year's quake still fresh in many minds, the information awareness campaign continues on.

Earlier this month BC hosted a province wide preparation drill called the Great BC Shakeout, designed to better inform the public as to the steps required to be properly prepared

Locally, Prince Rupert is set to hold a Tsunami Information meeting on Thursday, November 7th. A two hour session from 6:30-8:30 at Northwest Community College, which will offer up information and advice for local residents, offering up suggestions and advice on  how best to prepare for when the next incident may strike.

To learn more about the November 8th information session on Tsunami preparation, you can review our item from October 21st here.

As part of their information program, Emergency Measures BC has provided an online map of Tsunami Notification Zones in BC and for the  North Coast and Haida Gwaii.

For a larger map of any other area of British Columbia, click on the notification zone of interest to you.

You can review our items of note from October 27, 2012 here, further items regarding the seismic activity in the region through the year can be found on our archive page.