It's quite alright, they have the right! No need to fight... Now, does this mean that the issue goes out of sight?

The great debate over Yertle the Turtle and a few other contentious issues of education over the last year has come to an end.

Freedom for Yertle has been declared, as the BCTF has found a successful outcome to a string of grievances with various School Districts in the province, including a rather famous one with School District 52.

As you recall from the Spring of 2012, School District 52 captured some of the regional and national spotlight over the case of Yertle the Turtle, or to be more precise, the quotations of Yertle as reviewed by then School District administrator Dave Stigant...

The declarations of Yertle and other issues went on to the hearing phase, with a freedom of expression grievance  resolved in favour of Yertle (and the members of PRDTA).

The successful outcome of that hearing, would seem at least in the minds of the BCTF, to have settled this particular issue of freedom of expression and constitutional rights for teachers in the schools.

The Yertle ruling if you will, was part of larger issues of concern that continued on into the Spring contract troubles between the BCTF and School Districts across the province.

With the resolution of the most recent hearing, the teachers who had received disciplinary measures have reportedly received apologies and any letters of discipline that were issued have been removed from their files.

As well, according to the BCTF News bulletin, the School District's involved have had to admit that their administrators overstepped their bounds of authority.

Now that the Yertle controversy has been brought to a rest, one wonders if the next item on the agenda for resolution will be from the fashion file. 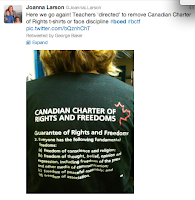 The PRDTA was also caught up in controversy earlier this year, at that time over the issue of the wearing of T shirts that outlined the Canadian Charter of Rights and Freedoms.

That proved to be a tempest that seemed to frame some of the ongoing discord between the School District and its teachers on the North Coast.

Since that time, there has been a changing of the Administration guard at School District 52, so it will be with interest that all will watch to see if relations improve or stay much the same between the two sides.

As would be expected, the tale of Yertle's triumphant return to the classroom has made for much news in the last 24 hours, some of which you can review below.

As the Freedom of Yertle continues to resonate both near and far, we shall add to the listings below, as they become available.

We have a larger overview of School District 52 issues on our Archive page
Posted by . at 10:03 AM

Email ThisBlogThis!Share to TwitterShare to FacebookShare to Pinterest
Labels: October 2013, Yertle the Turtle controversy comes to an end in favour of teachers