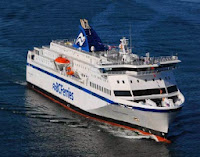 With adverse weather anticipated for the Haida Gwaii and North Coast regions this afternoon and evening, BC Ferries has issued a Service Notice for the Prince Rupert to Haida Gwaii route, suspending the departure of the Northern Expedition from Thursday afternoon to Friday morning at the earliest.

As we outlined on the blog earlier today, a weather system that is approaching Haida Gwaii and the North Coast is expected to bring wind and rain to the region, the most intense of which will arrive in the afternoon and evening hours.

The BC Ferries Advisory, revising the schedule of operations was released at 10:45 on Thursday. 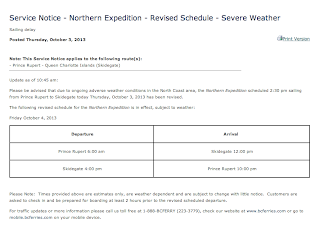 Further updates on the schedule can be found on the BC Ferries website and through their twitter feed.
Posted by . at 11:48 AM