Council may have to wait for the Canpotex reply 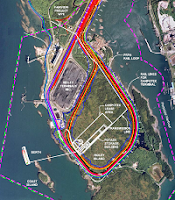 Last month,  Prince Rupert City Council expressed its concerns over the lack of progress on the development of a potash Terminal at Ridley Island.

With council suggesting and indeed offering an invitation to officials from Canpotex, stressing Council's belief that the company should make some arrangements for a trek out to Prince Rupert.

A gathering which would serve to update the community regarding their plans for the much anticipated potash terminal for Ridley Island.

Mayor Jack Mussallem and Councillor Joy Thorkelson took to the microphone at the September 9th session and outlined their concerns over the lack of communication from the company.

With Councillor Thorkelson reminding council, of all that the she believes the City has done in the recent past, to help pave the way for Canpotex to call Prince Rupert home.

You can review the discussion on that theme from our City Council Timeline (the Canpotex discussion arrives at the 1:17:00--1:24:00 mark of the City Video Archive for September 9th)

We're not sure if Council ever made contact with Canpotex officials regarding the proposed potash summit, or if the date and time is ready to be announced just yet.

But we have a feeling, at least considering the latest news from the financial markets, that they and any other Potash company probably have their hands full at the moment.

October it seems has not been kind to the potash markets, with the Potash Corporation cutting its profit forecast amidst all the market turmoil.

How all that may impact on the future plans for a planned terminal in the community remains to be seen. But we imagine that at the moment, those that manufacture and ship the commodity are probably looking to stabilize their industry, before they make many other moves involving major investment.

If Council members want to get a better background on the current turmoil, they may wish to take out a subscription to the Globe and Mail's, Globe Unlimited feature.

On Friday, the Globe offered up a review of the many threats to the industry, the working title of the article being:  "What's next for Potash, a plague of locusts?" (subscription required)

It may explain why that community forum that City Council has requested, isn't quite on the drawing board just yet.

You can review some of our past items of interest on the Canpotex file from our archive page.
Posted by . at 9:38 AM