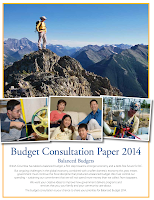 A Wednesday afternoon session that went into the evening in Prince Rupert was the last stop of the week for the Provincial Government's Select Standing Committee on Finance and Government Services.

Their trip to the North Coast is part of their ongoing 2014 Budget Consultation process.

The Prince Rupert session took place at the Metlakatla Room of the Highliner Inn. With  a number of presentations made to the panel, each presenter trying to make their points and observations within the allocated time for each group that was provided for Prince Rupert.

Some of those making presentations on Wednesday were:

Des Nobels, representing the SQCRD, who explored topics ranging from requests for better revenue sharing, bridging funding, BC Hydro increase concerns and issues over infra-structure across the Regional District.

Elizabeth Wilson, representing a Task Force on North Coast Literacy, made the case for the value of increased literacy programs across the Northwest, as well as some of the challenges in the region to deliver those programs.

Dr. Denise Henning and Deborah Stava of Northwest Community College appeared in front of the committee,  with the college outlining how it is positioning to deliver programs for the industrial activity in the region. They also touched on the deteriorating nature of the some of the campus buildings across the Northwest, in particular the need for improved facilities at the Terrace campus.

Ken Veldman of the Port of Prince Rupert, provided an overview of Port related developments in the region and the need to maintain a strategic focus on the trade corridor, the need for more collaboration on land use planning and unlocking the potential of the port and export industries.

Corinne Bomben from the City of Prince Rupert, outlined some of the city's concerns regarding infrastructure and outlined three key issues that the City has for the province. Stressing that water system,  transportation and liquid wast regulations and treatment requirements were among some of the city's main priorities.

Other presentations were made by the Judy Fraser, Mikael Jensen of the NWCC Students Union and from Peggy Davenport who spoke on some of the social issues in the community.

You can review their many talking points and concerns from the transcript of the entire Committee session in Prince Rupert found on the Standing Committee's website.

Background on the Committee and their work to date can be found here.

You can also look over the thumbnail sketch of what a Budget Consultation Paper looks like here.

Their next visit to the Northwest will be on October 16th when they take the Committee sessions to the Community Futures Building on Lazelle Avenue in Terrace.

The Committee is required to provide their report on the consultations by November 15th.
Posted by . at 3:56 PM