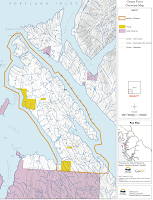 There is some interesting reading to be found these days on the future prospects for development of the Grassy Point region north of Prince Rupert.

That stretch of land has already been identified as a possible location for the percolating LNG industry in the region. Though up until now, most of the discussion of Grassy Point has been that of the LNG terminal variety.

However, it now seems that for some proponents of development in that area, there has been mention of the possibility of oil shipments from that region and what a mention it is.

According to an article in a publication called the Western Canada Native News, a proposal for not just an oil terminal, but an oil refinery, is being suggested for the region.

The review of the oil refinery mention comes from Damien Gillis, who recently spoke in Prince Rupert regarding developments in the LNG industry of the region.

In the articles above, Eagle Spirit Energy Holdings, has been identified as apparently one of the key participants in the proposal, a group that seemingly has some interest in the Grassy Bay region.

Eagle Spirit Energy Holdings, was formed one year ago, with Calvin Helin, a member of the Lax Kw'alaams First Nation named as Chairman and President.

The company has significant backing behind it, with Dave Tuccaro one of Canada's top Aboriginal Businessmen on the board, along with the participation  of British Columbia's Aquilini investment group (yes, those Aquilini's,  owners of the Vancouver Canucks).

The profile of the new group has been on the rise since that September 2012 start up, with a fair amount of attention directed to the launch of the company.

The Eagle Spirit Group has been fairly active in seeking a higher profile role for British Columbia's First Nations in the development and transportation of resources in the province, so their mention as possibly part of this oil refinery proposal is certainly something to make note of.

As we outlined on the blog last month, the speculation that Prince Rupert may one day be a shipment point for Alberta oil gained a bit of interest with word that CNOCC the Chinese national oil company was investigating the idea of an oil by rail project.  An answer perhaps to their quest of shipping raw bitumen from Alberta to Chinese refineries, by way of a shipment terminal in the Prince Rupert region.

The Chinese energy giant has previously expressed their interest in staking out a space in the Grassy Point region for their own LNG development, so one imagines that considering their holdings in the oil industry as well,  the thought of a shipment terminal has probably been discussed somewhere.

Mention of an oil refinery for the region, is new to the discussion however and it will be interesting to learn more about any proposal in that regard and what interest, if any that Eagle Spirit may have in it.

Worth watching as well, will be the reaction and impressions of the many opponents to any kind of oil shipments from the North Coast and this latest thought that Grassy Bay, may soon be some form of new energy hub for Western Canada.

Other media reviews of the Gassy Bay prospects can be found below:

The Tyee-- First Nations energy company floats oil refinery near Prince Rupert
Posted by . at 10:05 AM