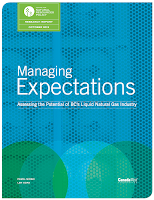 An Alberta think tank has outlined that time is off the essence for the Province of British Columbia when it comes to move on it's plans for LNG development.

Otherwise global developments may reduce potential revenues and the need for the large scale of development that has been put forward so far.

The Canada West Foundation released their findings on Tuesday, with a review of current global LNG development and British Columbia's potential place in that world LNG marketplace.

The title of the report compiled by Pawel Mirski and Len Coad is: Managing Expectations: Assessing the Potential of BC's Liquid Natural Gas Industry

It is a twenty one page report that highlights the competitive nature of the LNG industry. Highlightin how the timing of the British Columbia projects could impact on it's projected revenue stream and the infrastructure in Northwest British Columbia that will be required to deliver the resource to world markets.

Looking at the proposed industry infrastructure for British Columbia the report observes that the province is coming late to the party and that the large number of proposed terminal projects that have been mentioned for the Northwest may not be a realistic expectation.

Their review anticipates that owing to a number of factors, a shorter list of projects than that now put forward will be constructed as the BC industry moves forward.

The main case for that reduction in proposed terminal development may come from competition in Asia, Australia and in the USA, with Russia as well making inroads in delivering their natural gas reserves to Asian markets.

Add into the mix, the fact that China is exploring its own territories for gas reserves, with some experts suggesting those may be the largest in the world.

A resource which when developed, would no doubt change the nature of the LNG industry in a very significant fashion.

A prime example of some those challenges ahead for BC comes from the listings of LNG plants that are already under construction around the world, the majority of them at the moment found in Australia and other Southeast Asian locations.

More competition can be found in the United States, as there are currently over 16 terminals proposed for American locations, though for the most part  LNG observers suggest that they are designed to service the European continent .

The full listing of the projects underway or planned can be found on Pages 16-19 of the report.

And while the report stresses that British Columbia has an unprecedented opportunity to develop its shale gas resources, construct pipelines and terminal development; time they say is of great importance.

The authors suggest that the expectations outlined by the Province just one year ago, may be tough deliver in the long term.

Particularly with the impact that global competition may have not only on supplies to markets, but from downward pressures on the price available for the resource and in the revenues to be returned to British Columbia.

As a conclusion to their report, the Foundation issued four key recommendations:

Notwithstanding the economic boost expected from natural gas production, efforts to grow the natural gas industry should not crowd out other natural resource opportunities.

The call to move quickly will most likely have more resonance with the provincial government and industry officials, than it will with those that may have hesitations over such large scale development on a fast track timeline.

The prospect of widespread shale gas development and pipeline projects does have some opposition in the province and those that want more information, or wish to see a slower time frame in place, most likely won't be holding the Canada West Foundation's report up in the air as their template.

It will be worth watching to see how the Provincial government balances those two competing themes, while keeping an eye on the competition as they seek to move their Natural Gas program forward at an advanced timeline.

The release of the report provided for a number of media reviews yesterday, some of them can be found below.

You can review more on the proposed LNG projects for the Northwest from our archive page.
Posted by . at 10:43 AM