The goals at Rampage home games this season will mean more than numbers on the scoreboard, as for the second year in a row Rampage goal scorers will once again be lending a hand to the Salvation Army thanks to the Prince Rupert Port Authority.

With the Prince Rupert Rampage home season about to begin, the Port announced on Friday that they have renewed their title sponsorship with the CIHL team, ready to offer their support for the 2013-14 season to the Rampage both on the ice and in the community.

In addition to their title sponsorship, the Port Authority is once again making a commitment to donate100 dollars for every Rampage home game goal through the 2013-14 season.

Last year the Port, through the goal scoring skills of the Rampage players donated $3,100 dollars to the Salvation Army.  A donation that went helped with some of the Salvation Army's work in the community. The Salvation Army operates the city's only food bank, as well as providing for a soup kitchen and Christmas Hamper program. 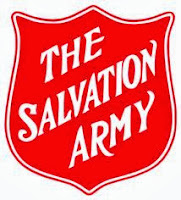 With nine regular season home games on the schedule, the always loud and boisterous crowds at the Jim will be cheering on each goal and urging the Rampage to keep the pressure on until the final whistle.

Both the Rampage and the Port are also making the 2013-14 season a bit more interesting for Rampage fans, followers of the squad can "like" both the Port of Prince Rupert and Prince Rupert Rampage facebook pages, those that do will gain access to exclusive team info, contests and various team events through the season.

More on the plans of the Port and the Rampage can be found from this media release from Friday.

As we outlined on the blog on Friday, the first home game of the season takes place Saturday night at the Jim Ciccone Civic Centre, puck drop is at 8 PM.
Posted by . at 8:52 AM

Email ThisBlogThis!Share to TwitterShare to FacebookShare to Pinterest
Labels: Port renews commitment to Rampage for another season