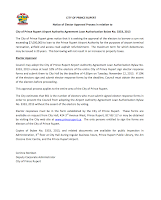 While the low attendance of Wednesday night for the City's Open House on the Airport Loan Authorization process may indicate a lack of interest in the topic, there are still some concerns for a few residents, as to how the process is taking place.

With the clock winding its way down to the November 12th deadline (the final date for those that are opposed to the process to Marshall their support) a key aspect of the City's original explanation of that process seems to be less than easily accessible.

When the city introduced to its website the nature of the process ahead for the Authorization Bylaw, there was this notice posted which advised...

"Elector responses must be in the form established by the City of Prince Rupert, These forms are available upon request from City Hall, 424 3rd AVenue West... or may be obtained by visiting the City website at www.princerupert.ca."

Helpful advice, though not quite complete, as obtaining the request form through the City Website doesn't appear to be very easy, perhaps an oversight for a city staff with a pretty heavy workload.

After a review of the city's website today, near as we can tell, there is still no actual link provided, that takes you to the response form as outlined by the City.

An impediment to any resident, that may wish to print the form out at home, consider their options and then return it to City Hall. 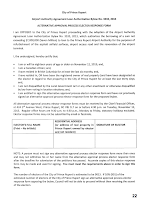 To the City's credit, there is a fair amount of background on the topic available through the city website.

Including, a fairly extensive information package  found as part of the Council agenda from September 30th (pages 19-22).

That's where we found what appears to be the form in question, far down the review tucked away  on page 22 of the Council Agenda of September 30th.

An example of how at times, unless you have the patience to do a little digging, seeking out information on the city website, can take one along a path, that isn't exactly the thing of a user friendly approach to information sharing.

Which in the case of a controversial topic such as the Airport Loan Authorization process, tends to make the issue hard to understand, leading to confusion on the topic.

Some of the concerns expressed recently about this particular approach to moving the Approval process forward (including those expressed by two city councillors), were that it isn't considered as particularly democratic.

And indeed, the Alternate Approval process does seem to feature a few hoops, that makes the process appear to be designed to deliver the outcome desired.  That of avoiding a referendum on the topic,  an approach for approval that was recommended by Councillor Ashley (and voted down by Council) on September 30th.

In all fairness to those that are taking the time to learn more about the issue.  If, as the City suggested by their notice of last month, the response form is available on the city's website, then it should actually be made easily accessible on the website.

Featured as a link in a prominent spot and as part of the full presentation of the topic. Not as it seems at the moment, buried deep into the minutes of past a Council session.

Some of the media reviews of the Wednesday night Forum can be found below.