An announcement made earlier today from Malaysian Prime Minister Mohd Najib should resonate with much interest on the North Coast of British Columbia, as the prospect of the proposed massive Petronas investment into the region seems to be ready to move ahead.

Speaking prior to the Asia-Pacific leader's summit in Indonesia this week, Najib spoke with Prime Minister Stephen Harper and offered up his endorsement for what would be a 36 billion dollar investment into British Columbia's LNG industry.

No specifics were outlined at the meeting of the two leaders, but media accounts of their get together offered up some background on the announcement from the Malaysian leader. Highlighting the impact that it may have not only on the plans for Petronas, but on the political scene for the Prime Minister back in Canada.

The Petronas proposal is one of two currently under active study for the Prince Rupert region, (others are still in the early stages of discussion) you can review more on all of the LNG proposals mentioned of late for the North Coast from our LNG development archives.

What impact that today's announcement out of Indonesia will have on the process ahead for Petronas remains to be seen. Before anyone gets too far ahead of the development curve, there are still any number of environmental concerns to address, not to mention pipelines to be built and prep work on an actual site for the LNG terminal proposed for Lelu Island. 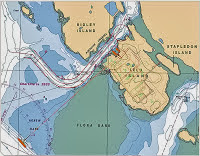 But with the commitment today from the Malaysian government to move the project forward, the reality of an LNG industry on the north coast may be moving closer and closer to the actual shovels in the ground aspect of development and with it the potential expansion of the North coast economy.

Some of that media review from today's announcement can be found below, we'll update the file further, as items are made available.