Rupertites are on the clock in Alternate Approval Process concerns 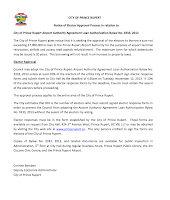 After a fair amount of debate and the declarations of two Councillors that the process isn't one that they favour, the City of Prince Rupert last week voted to move forward with the Alternate Approval Process, designed to set up approval of the Airport Authority Loan Authorization Bylaw.

As we outlined last week, both Councillor Anna Ashley and Councillor Joy Thorkelson expressed their dislike of the process that Council has taken in this question, outlining that they don't believe it to be fair, nor democratic.

You can review their concerns further from the Video Archive of the September 30th Council session available here, the Council discussion runs from the 1:52:00 mark to 2:17:30.

However, with a vote of 4 to 2 last week, Council is moving on with the process, which means that those Rupert voters that might wish to express their own concerns, by way of signing a form to prevent Council from the adopting the agreement, have a short window of opportunity to express that concern. 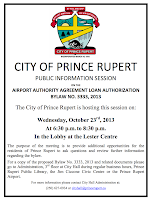 A vote of 10 per cent of eligible voters, estimated to be around 901 signatures are required to prevent the Alternate Approval Process in moving forward and the City outlined more of that process through advertising this week and by way of a link to the full review on the City's website.

Among the information available on the website, is the notification that the Bylaw Authorization Agreement will be up for discussion on Wednesday, October 23rd, when City Council will make its case in a public forum in the Lobby at the Lester Centre.

Those interested in the process will have opportunity to ask more questions and review information on the proposal.

With all that information, those residents of the city who still have concerns over the process that the city has embarked on, can express their dis-satisfaction by way of the Alternate Approval Process.

The key part of that process being the requirement to sign an elector response form, available at City Hall.

The deadline for submitting those forms is Tuesday, November 12th at 4:30 PM.

If the required ten percent is reached, then Council will have to consider other options of moving the Loan Bylaw forward, which if Councillors Thorkelson and Ashley could have their way, would mean taking it to the public by way of referendum.

Should Council not receive opposition to a total of that required 10 percent, the the Airport Authority Bylaw 3333, 2013 will move forward as the Alternate Approval Process allows.

More background on the Prince Rupert Airport and in the process to move the Loan Bylaw ahead can be found below.

The full archive of Air Transportation items for the Northwest can be found here.
Posted by . at 2:55 PM