A home stand on the horizon for the end of the month; as Rampage hit the road this weekend, with trek to Kitimat 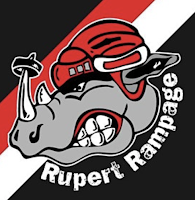 The Prince Rupert Rampage have one more climb aboard the bus this month, that  as they prepare to make their way to Kitimat for a Saturday match up with the Ice Demons at the Tamitik Arena.

The contest one that is key for the Rampage as they continue to hold off the Quesnel Kangaroos in the battle for Second place in the CIHL.

Both teams currently are looking up at the Terrace River Kings, the league leaders boasting a record of 9 wins, one Tie with 19 points, seven more than the Rhinos.

The Rampage will be looking to take advantage of some of the struggles the Ice Demons have had on their side of the blue line this season, the team sporting a total of 68 goals against after ten games played.

Prince Rupert will be heading to Kitimat with an extra step in their stride, that following a thriller of a contest in Terrace last weekend which went to Double Overtime as the Rampage held off the River Kings to take a point out of the Skeena Valley.

The Rampage found some additional scoring punch from newcomer Joel Gage who had two goals as part of the 3-3 tie last Saturday.

The team will also be looking for both Hunter Johnson and Judd Repole to have a strong finish to the season, with both currently within striking distance of the overall scoring lead in the CIHL.

You can explore how the two teams compare ahead of Saturday's game here. 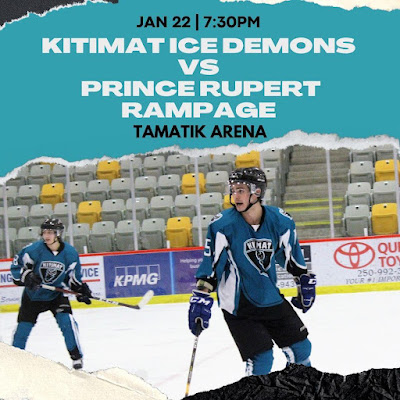 Puck drop in Kitimat Saturday is set for 7:30.

Once the Rampage return to Prince Rupert, they can focus on their next three games, all of which will be taking place in the Madhouse on McBride, with the twin bill of a Cariboo invasion set for next weekend January 29 and 30, when Williams Lake and Quesnel come to town.

The team wraps up their home dates of the regular season  on February 5th when the Terrace River Kings travel the hour an a bit to Rupert for another showdown in the ongoing rivalry between the two CIHL clubs.

The night one which could be a preview of how the CIHL playoffs may wrap up should the two navigate the post season as many expect.

Keep up to date on the developments from the Rampage room from their Facebook page.

More notes on the CIHL can be reviewed from our archive page.