A welcome return home for Prince Rupert's homeless ... but still much work to do on affordable housing in the city

Word that Crane's Crossing is back in operation for Prince Rupert's homeless population is a welcome one, providing for some semblance of certainty for those in the most need in the community.

It was noted this week that after some renovation work, the Five Corners facility in the old Raffles was once again welcoming its residents back.

That after a number of months of a temporary return to the Fisherman's Hall which has been the default location on two occasions now as the homeless population were moved increasingly westward along Third Avenue West.

First from the previous location of the Homeless Shelter one block east from City Hall and then on to the Fishermen's Hall towards the west on Third, the old union hall filling in the gap as the Crane's Crossing Centre was made ready,

Though as things turned out there, some further renovations were required before it would serve as the the permanent spot; with the Fisherman's Hall as we noted in December, fortuitously still available for service during the bitterly cold weather of December and early January.

With the recent renovations to the homeless space at Crane's Crossing now complete, work can now also move forward on the rest of the renovation for the facility, which will see additional supportive housing in place in the future.

Originally, the hope had been for the full structure to be in use by the fall of 2021, however a range of issues have clearly pushed that hopeful date back from the notes of May 2020.

So far however, the Prince Rupert Transition House Society, BC Housing and the province have not updated any timelines as to when it's anticipated that the full use of the Five Corners property will be in operation.

The return to Five Corners comes as the housing need in the community continues to grow, made more urgent following the recent fire at the Angus Apartments.

An event which has left a number of tenants homeless and seeking new accommodation and made for a brief mention at the first City Council session for 2022 last week.

The Angus Apartments fire, like a number of other high profile fires in recent years, along with a growing issue of renovictions has made an already dire situation for affordable housing much worse.

With fewer and fewer options for those on the margins in Prince Rupert to find a place to live.

And while grim at the moment, there are some positive trends on the horizon when it comes to some momentum towards solutions; with two high profile projects set to move forward a bit later this year.

The first a remake of the McKay Street area by BC Housing, which has its Harbour View Gardens concept  in the planning stage for close to  a year, the timeline suggesting that progress on the west side could see the rebuild of housing there get started later this year or in 2023. 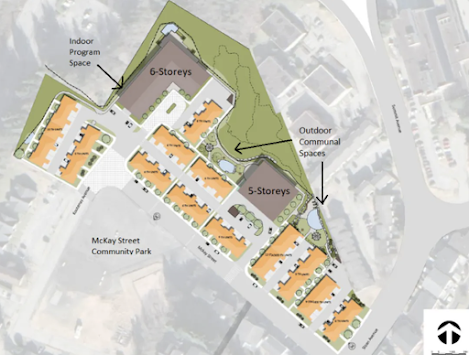 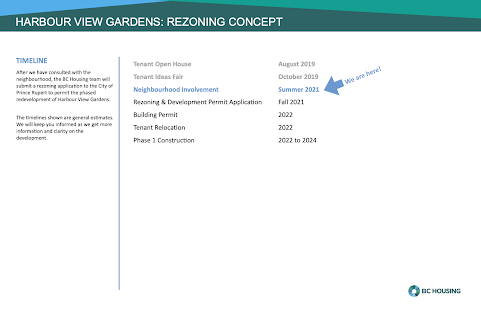 That housing proposal to offer apartments for Lax Kw'alaams Band Members in Prince Rupert, is to be funded by the BC government and to be built on land provided by the City of Prince Rupert.

The project having navigated a lengthy approval process through City Council to make it to the bureaucratic finish line, though the first shovel in the ground has yet to take place.

Those two projects will provide for some relief once complete, but that is still a fair bit off and the housing concerns continue to dominate a lot of the conversation in the community and even with the additional volume of housing they will provide, there will still be a need for much more in the way of affordable housing to be built.

Something that will have to be delivered through either private property developers or the provincial government through BC Housing.

And so far, there do not seem to be many plans percolating in development to suggest we'll see any further progress on housing in the short term.

A topic which MLA Jennifer Rice may want to take up with David Eby the Minister responsible for Housing to ensure that Prince Rupert's needs remain high on the agenda for the NDP government as the Minister continues to announce affordable housing initiatives across the province.

You can review some of the past themes on housing through our archive page.