Dogs, or their owners to be precise, on the minds of two North Coast communities this week

Both the City of Prince Rupert and the District of Port Edward are starring off 2022 on a Dog patrol, with the two North Coast communities making notes on a couple of issues related to canines, or more importantly their owners.

In the District of Port Edward, it's a concern over wandering dogs that has caught the attention of District officials, taking to their Social Media feed to remind dog owners of the consequences of letting their animals wander off the property line.

Residents of the District looking to give their pets a workout can now take advantage of the new Dog park in the community, an area celebrated by the District in the fall of 2021.

For the City of Prince Rupert it's not so much the wandering ways of the pooches, but what they're leaving behind when they make a pit stop that has caught their attention.

The City making note of a concern over the volume of effluent left behind and now visible as the snow bids us farewell. 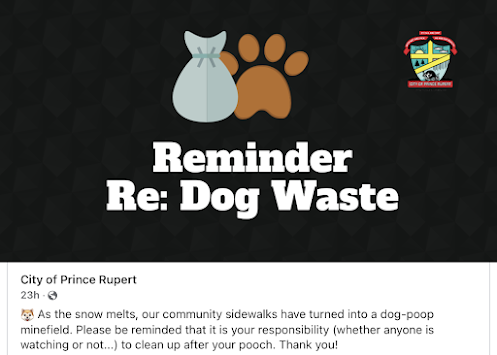 The City's missive to pet owners is making for some lively conversation on their Social Media portal, with residents sharing locations where the largest dangers lurk for pedestrians.

More items of note from both communities can be explored below: