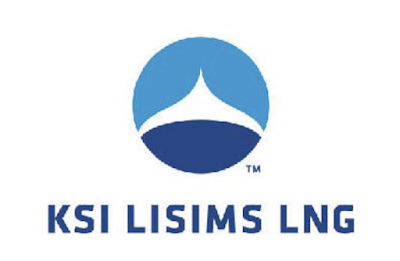 Members of the Nisga'a Nation and other interested stakeholders and observers across the Northwest will be able to gain some new information later this month. That with plans for an update for development of an LNG facility in Nisga'a territory.

The review of progress so far will come on January 26th with a Virtual Open House for the KSI Lisims LNG project with the online information session to start at 6:30 PM.

Nisga'a President Eva Clayton made note of the upcoming event in a message for members of the nation from earlier this month. 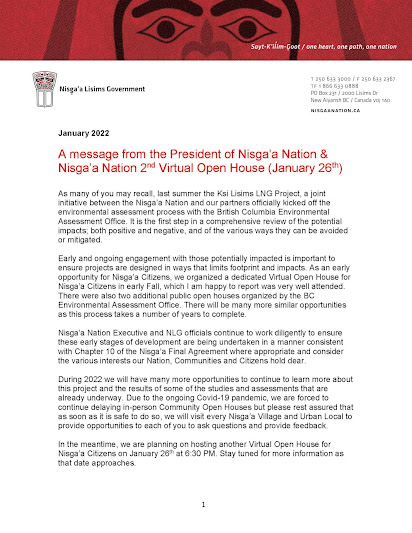 As noted in the correspondence to members, the proposed project is currently working its way through the British Columbia Environmental Assessment process, the most recent update to that file coming in October of this year.
The October entry to the BCEAO process provides a summary of some of the feedback that has been provided to date related to the project, with much of the commentary that has been delivered coming from neighbouring First Nations.
Some of the areas of note from the engagement to date can be reviewed here.
Of interest on the North Coast, are the contributions from Lax Kw'alaams, Metlakatla and the Gitxaala Nation.
Among the themes all three explore in their correspondences:
The Gitxaala Nation observes of the unique culture  and connection to lands, waters, communities and culture that could affected by the project, with a focus on the impacts on marine harvesting, community health and well being, to name a few.
In the case of Lax Kw'alaams a note that the Band has never ceded or surrendered any of their territory or interests to the lands, waters and resources throughout their territory.
Metlakatla issues a similar reminder on themes of note having ceded or surrendered any of their territory as well as to provide an extensive list of items of note for their membership in relation to the proposal.
A wider overview of the documents submitted is available here, to access those notes, click on the correspondent of interest to you.
A public comment period came to an end in late September of 2021, the findings from that consultation can be examined here.
Ksi Lisims LNG is a proposed 12-million-tonne-per-year LNG project at Wil Milit on the northern tip of Pearse Island near Gingolx.
The Nisga’a Nation, Rockies LNG and Western LNG are the three proponents of the project.
A look at what they have proposed is available here.
For notes on the upcoming Virtual Open House and other Nisga'a themes follow their Social media stream and website.
Some of our past items on the KSI Lisims plans can be found from our archive page.
Posted by . at 9:16 AM