Residents of Lax Kw'alaams who may have missed the information sessions last week on plans for additional housing in the community, now have a chance to review the video, with an encore presentation now streaming through the Lax Kw'alaams Facebook page.

The half hour video outlines all of the elements towards the proposed housing, as well as the consultation process that makes up the path to the January 31st referendum.

Made up of mainly three and four bedroom housing, the housing will consist of 20 affordable housing units for the community. 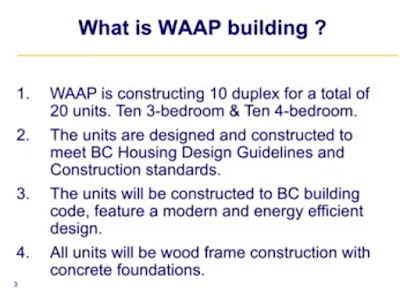 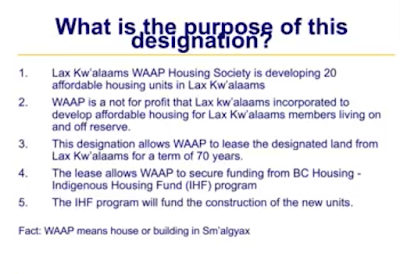 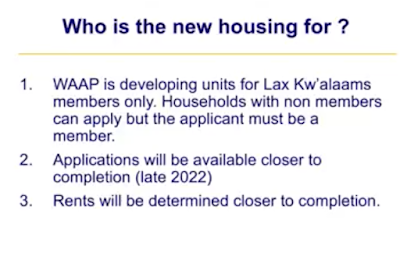 The new homes are to be built in a new subdivision in Lax Kw'alaams in the Simpson Boulevard area, which was opened up fifteen years ago for residential use and has remained vacant for the most part since that period of time.

It's anticipated that the construction of the units will help to address the 34 applications for housing on reserve in the community.

The nature of the referendum is to provide approval for the Band to move forward on the leasing of the  land by the WAP Housing Society for the use for the affordable housing. 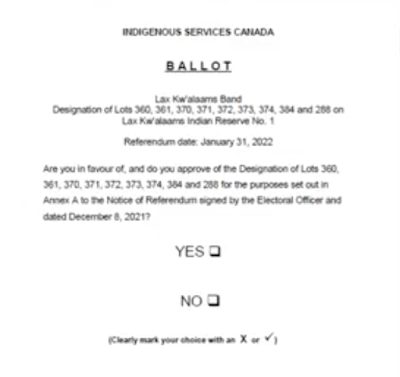 If approved by simple majority,  the designated lands will retain their reserve status, and Lax Kw'alaams bylaws will continue to apply, as well as tax exemptions.

Voting is to take place on January 31st, either by in person voting at the polling station or by mail in ballot.

The physical polling stations will be located at the Elders Lounge in Lax Kw'alaams or the Lax Kw'alaams Community Hall in Prince Rupert. 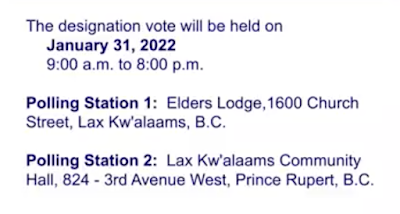 You can review the presentation from  the video below:

Also of note from the presentation, an update on the plans for the Prince Rupert housing from Lax Kw'alaams WAP Housing Society for the 11th Avenue East area.
With the plans for the seventy units of housing expected to see construction get underway in the next ten months or so.
Both the Prince Rupert project and the Lax Kw'alaams Housing plans are being funded by BC Housing.
We made note of the pending referendum in lat December, you can review those notes here.
For updates on the referendum process follow the Lax Kw'alaams Facebook page.
More notes on housing in the Northwest can be explored here.
A wider overview of themes of note from Lax Kw'alaams is available here.
Posted by . at 9:37 AM