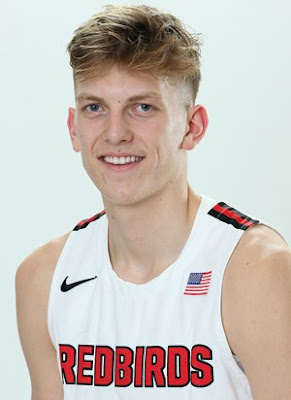 It was a big night on Wednesday for former Charles Hays Rainmaker Liam McChesney, as the Prince Rupert basketballer made his first start in the NCAA.

The 6 foot ten forward taking to the court for the opening tip with the Illinois State Redbirds, the occasion marked on twitter with a shoutout from a sports journalist covering the NCAA in Illinois.

For his first start, the Rupertite saw twenty seven minutes of play and contributed fourteen points along with four rebounds for the Redbirds, the team coming out on the short side of a controversial 89 to 88 Overtime loss to Drake.

A missed foul call by the referees was the source of the controversy, that as the overtime session came to an end of what was a high energy contest on the night for both teams.

The fourteen points for McChesney were the most in one game in his NCAA career, which began at Utah State, prior to his transfer this year to the midwest and Illinois State campus in Normal, Illinois.

A short video presentation of the game shows McChesney in some of the action here.

The Boxscore that breaks down the scoring on the night is available here.

Some reviews of the game can be explored below

A look at some of the previous mentions for the former Rainmaker while on the court with the Redbirds this season can be found here.

More notes on McChesney's travels and those of other former Rupert athletes at the college or university level can be reviewed through our archive page here.