A full count of how many residents are impacted has yet to be outlined, but for those who called the Angus Apartments home, the search now begins for new accommodation.

That as the building has been declared uninhabitable following the Tuesday night fire that sent tenants into the streets on a bitterly cold winters night.

Officially the structure is listed as a fifteen unit apartment complex, but it's likely that there were a number of additional residents living in the apartments other than those listed as the renters; and for them the task ahead will be a daunting one in a housing market still constrained with few affordable apartments or rooms for rent.

Thursday evening, the CBC posted a story that outlines the history of a number of complaints about the structure from the past two years and the listing of fines that were assessed as part of those past complaints.

Included in the story from reporter Kate Partridge are the rulings from the Residential Tenancy Branch, which highlight the litany of concerns of tenants that led to the fines.

The report also features commentary on the situation in Prince Rupert from local housing advocate Paul Legace, as well as to note that no one was available for comment from the City of Prince Rupert.

For the short term, the residents that were forced out of their homes by the fire are part of the City's Emergency Social Services program which offers up to 72 hours of lodging and food service and other items of need at times such as these. 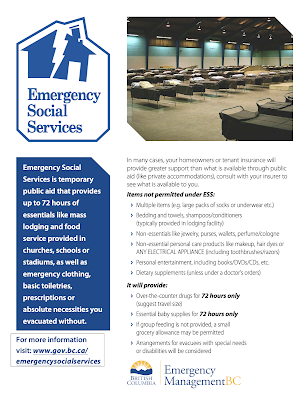 Should you have word on potential accommodations for them you might want to contact that service to ensure that those options are known for those in the most need.

You can reach them at emergency.response@princerupert.ca

The community has also responded in the last few days to the now former residents, with a growing list of items collected to be turned over to them to help rebuild their lives and replace in some fashion some of their belongings lost earlier this week.

Find out more on those efforts here.

A review of the state of housing in Prince Rupert can be explore from our archive page here.