Rainmakers split the weekend at No Regrets in North Vancouver

The first half of a weekend journey to North Vancouver didn't quite go according to plan as the Charles Hays Rainmakers dropped the first two games of tournament play, an early stumble which knocked them out of the run for the championship fairly quickly at the popular annual tournament.

Something which meant there would be no repeat of the run of a few years back when the Charles Hays Boys ran the table on the way to the 2019 Finals berth before bowing out in a tough contest pre COVID.

The tournament was back on for 2021 and despite some challenges in the world of travel the Senior Boys made it to the Lower Mainland for the Lower mainland event.

With Mel Bishop. working the bench solo the Charles Hays squad found themselves on the wrong side of the twin results for Thursday and Friday.

The first one of the tourney was a showdown with North Van's Argyle which topped the Prince Rupert Senior Boys 76 to 54.

Kole Jones set a new No Regrets tourney record with 35 points in one game in game one of the four game series.

Things turned around on the B side of the tournament Saturday as Charles Hays regained some of their swagger the rebound for the weekend led off once again by Kole Jones who was key to the turn around of Saturday, leading the Makers to the 64 to 50 victory over Seycove.

The final game for their weekend in the city saw Charles Hays go back and forth with Rockridge final pushing past them to claim an 81 to 74 victory, Kole Leighton among the to players on the court for the Makers making an impression; gaining recognition as payer of the game as the Rupert boys' visit to No Regrets came to an end.

The trip south at the start of December has become somewhat of a Rainmaker tradition, the high profile event providing a good opportunity to match up with some of the top teams from AAAA, AAA, and AA basketball in the Vancouver area.

To give you an idea of the range of competition at the event, the two finalists this year Handsworth and St. George's play at the top end of BC High school Basketball system, competing at the AAAA level.

St George's won the event 72 to 59 over Handsworth.

You can learn more about the long running and popular tournament from their website, which includes game stories and a volume of photos for the 2021 edition. 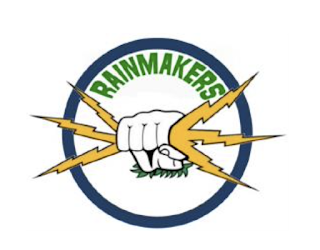 Up next for the Senior Boys is the annual Alumni Tournament at the Charles Hays Gymnasium, featuring six teams of Makers' past and present including the current roster of the Senior and Junior Boys.

Coaches Mel and Ryan Bishop not only leading the 2021-22 team into play, but hitting the floor as well through the event. 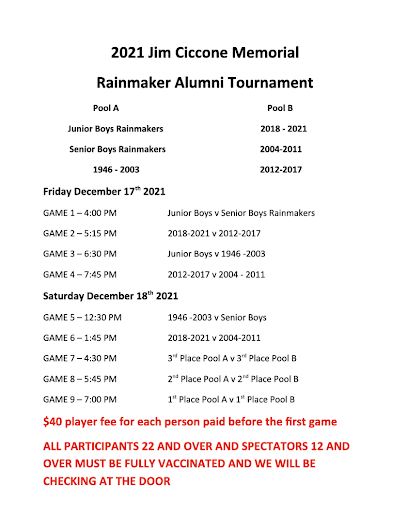 COVID protocols are in place for the event, with All participants 22 and over and Spectators 12 and over must be fully vaccinated, with CHSS to be checking at the door.

The Rainmakers return to Northwest play in the New Year when they play Caledonia  January 7 and 8 and then head to Prince George for games with Duchess Park on the 13th followed by the Kelly Road Tournament January 14 -6.

A busy month of travel wraps up January 21 and 22 with a trip to Smithers.

January ends in the friendly confines of the CHSS gym with a visit from Prince George Senior Secondary.

More notes on the Rainmakers can be found from our archive page here.