UFAWU-Unifor looks back at the challenges of 2021, sees more ahead for 2022

The union representing the members of the once thriving fishing industry on the North Coast have provided for an end of year message that looks back at a challenging twelve months and observes quite correctly that things will remain much the same for the year ahead when it comes to fishery issues in the region.

UFAWU-Unifor posted their message to members through their Social Media page last week, reviewing the difficulties faced by Fishermen, Tendermen and Shoreworkers, while noting of how they have tackled challenging times in the past and will continue to do so in 2022. 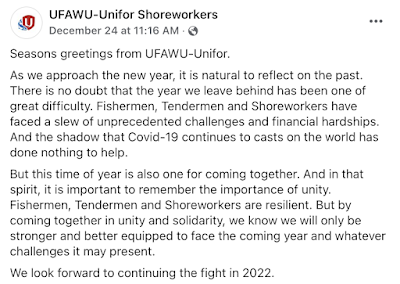 While they resolve to carry on in the New Year, they could use some help from government, with regulations from DFO in the last few years bringing a halt to many fishing opportunities, along with a changing narrative as to how the industry may look in the future.

As we noted earlier this month, the herring season, once a major income generator for local shore workers and fishing crews, not to mention the economy of Prince Rupert has dwindled in recent years, and next year won't take place at all.

The industry also once again has to reintroduce itself to yet another new Federal Fisheries Minister, with Joyce Murray taking on the duties as part of the new cabinet introduced in November.

Minister Murray's portfolio includes a number of new directions outlined through her mandate letter which we shared the details on prior to Christmas.

More notes on the Fishery on the North Coast and Haida Gwaii can be explored here.